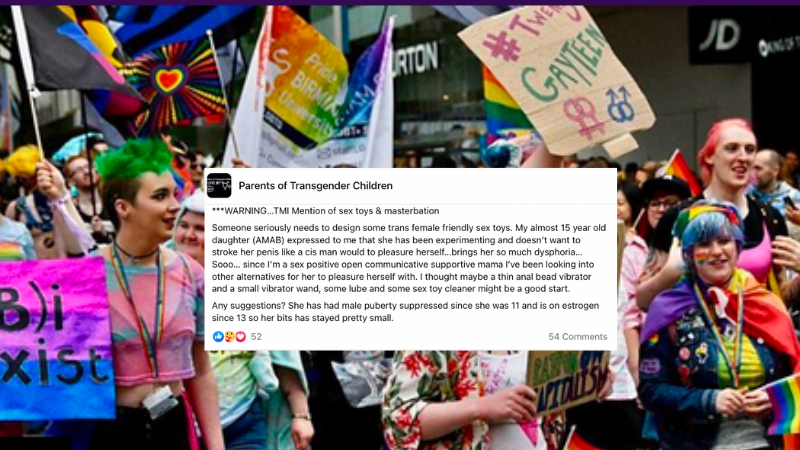 Facebook has been a key platform for parents of “trans kids,” and the platform is overflowing with private groups where parents can compare notes, seek advice from one another, and congratulate each other on their efforts to medically gender transition their children and teens. One recent post was from a mom who wanted to find out what kind of sex toys to buy for her child.

Many of the posts are shocking and strange, as parents discuss the need to stop their children's natural pubertal development, or assessing their pre-verbal children's desire to be the opposite sex, or question their children's true gender based on the toys those kids play with. Another post grieves the loss of grandchildren as her child is on the verge of being sterilized by cross-sex hormones.

Perhaps one of the most perplexing posts is one in which a mother of a trans child sought insight from other parents as to what sex toys she should buy for her child. Screenshots of the post were shared by the feminist group 4th Wave Now, which opposes pediatric sex changes. Those screenshots were then shared by Georgia Congresswoman Marjorie Taylor Greene, at which point trans activists declared that they were possibly fake.

Having reviewed the Facebook group, and seen the posts first hand, The Post Millennial can confirm that they are not fake. These posts are real, sincere, and show a mom desperate to help her child who is on the verge of a life without sexual intimacy.

The post from a concerned mother describes that her child, born male, is 15 years old, has stunted genital development due to having been on puberty blocking drugs since the child was 11-years-old. Pharmaceutical company Abbvie, which makes the drug Lupron, which is used off-label to treat gender dysphoria, recommends the drug be used for its designated purpose for no more than three months. This is due to side effects such as brain swelling, bone loss, and vision loss.

The group then offers recommendations of sex toys for the parents to buy for teens who are unable to imagine a life of sexual pleasure after they have been preventing from attaining adulthood.

Another post showed a mother grieving the loss of her grandchildren before her child was even grown. The child is 14 and about to take estrogen after having been on puberty blocking drugs since 12 years old.

“My daughter is set to start estrogen therapy in February when she turns 14,” the mother wrote of her biological male child. She notes that she and her child were approved to start estrogen at the age of 14 by a chilldren's hospital in her area. There are some 55 children's hospitals in the US that will undertake sex changes for children and teens.

“I got the consent form from Children's and the reality just kind of hit me,” the mother continues. “She has been on blockers for nearly two years and will start the therapy soon.”

It is only now that the child will become sterilized for life that the mother faces the reality of what has been done to her child, though she has no plans to stop it, and is encouraged by the other parents to move ahead with the drugs and sterilization provess.

“The reality of the big choices this young person is making is just so overwhelming sometimes,” the mother writes. “Not being able to have her own children it just such a devastating decision either way. She does NOT want to let puberty go enough to bank sperm. I want to support her in whatever she chooses. It just all feels heavy on my heart.”

The mother is surprised that her 14-year-old, who has never gone through natural puberty, does not want to be a parent. The teen is a child in body and mind, and will remain that way despite aging. 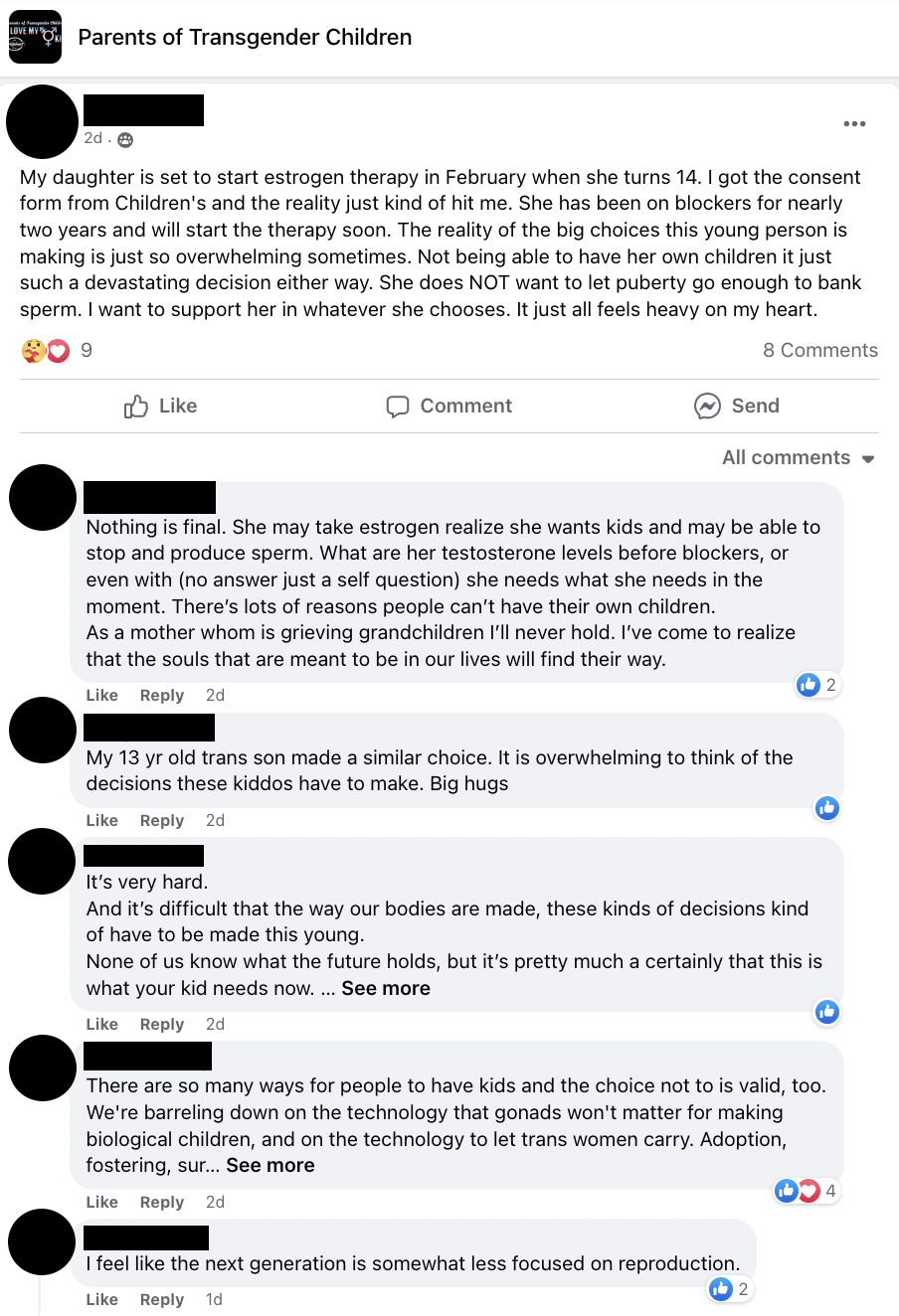 Other parents join in to press for the treatment to continue. One mother says that the future is not at all as important as the present.

“Nothing is final. She may take estrogen realize she wants kids and may be able to stop and produce sperm. What are her testosterone levels before blockers, or even with (no answer just a self question) she needs what she needs in the moment. There’s lots of reasons people can’t have their own children. As a mother whom is grieving grandchildren I’ll never hold. I’ve come to realize that the souls that are meant to be in our lives will find their way,” one mother, who has already lost both children and potential granchildren to the cult, affirms.

“My 13 yr old trans son made a similar choice,” another mother states. “It is overwhelming to think of the decisions these kiddos have to make. Big hugs.”

Another parent stresses that only positive energy should be given to this process.

“It’s very hard,” that parent writes. “And it’s difficult that the way our bodies are made, these kinds of decisions kind of have to be made this young. None of us know what the future holds, but it’s pretty much a certainly that this is what your kid needs now. Try not to worry about the what ifs – every decision we make can be second guessed. We should try to dwell on the positives of each decision when these things try to weigh us down.”

“There are so many ways for people to have kids,” another parent says, “and the choice not to is valid, too. We're barreling down on the technology that gonads won't matter for making biological children, and on the technology to let trans women carry. Adoption, fostering, surrogacy all also exist. Don't assume that choices now mean choices forever.”

“I have a 29 year old, a 17 year old and a 10 yo,” that parent continues. “The 29 yo is still grappling with ‘do I want to or not', the 17 year old will never have children (chromosome issue and congenital uterine malformation plus inability to consent make it highly unlikely) and the 10 year old is so far from that kind of thing as to make it not worth even talking about yet. I feel the urge for grandchildren, but it's out of my hands and I'm at peace with that.”

“I feel like the next generation is somewhat less focused on reproduction,” another parent says.

“I’ll start with, I hear you and you should feel the feels away from your daughter,” says a parent who is concerned that the mother's feelings will interfere with preventing the child from being sterilized.

“Then have a heart to heart with your daughter. Does your daughter want to have children? My daughter (then 15) immediately and firmly said no to freezing sperm (she was already 95% done with puberty),” the mother says. “She doesn’t want children and I believe her. She’s never been interested in children and hasn’t changed her mind in over 6 years. In addition, my daughter has dated only trans women and AMAB non-binary people. Sperm wouldn’t help her. If your daughter likes cis guys or trans girls, sperm won’t help her.”

This mother insists that if the child “wants children in the future, she’ll find a way. There are many ways to be a parent.” 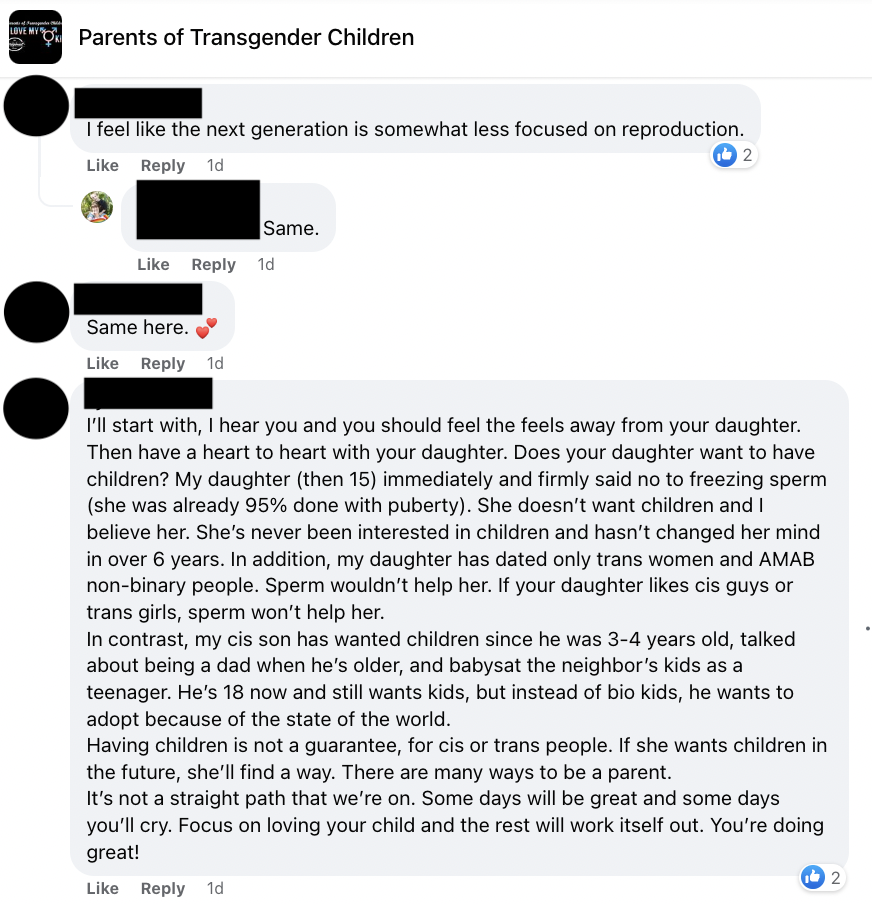 Another parent doesn't know how to talk to their child about puberty, despite planning to prevent them from going through that puberty naturally.

“My 9 yr old daughter is asking me about female puberty and has expressed her dysphoria about her penis,” the parent writes. “I’ve been discussing things with her like I would a cisgender child but I don’t know how to express to her how differently we’re going to have to handle puberty for her. Where do I start?”

It seems shocking to read that a parent intends to upend their child's entire life, marry them to a path of medicalized gender transition, and can't even bring themselves to honestly discuss those things with their child. The appropriate response is to talk to the child about how they will grow up male, and that there's nothing wrong with that and it is not a limiting condition. This parent prefers to drug their child than allow them to develop into adulthood normally.

It is not only children, but parents who are being misled. Instead of telling children that adulthood, parenthood, marriage and intimacy are worthwhile, no matter their sexual orientation, parents are hearing that children know better than parents and their wishes should be heeded.

Parents need to let their kids grow up naturally, without this kind of egregious medical intervention. Moms and dad will grieve the loss of their grandchildren before their children are even grown.

But these children, once adults, will realize what their parents allowed to happen to them, and many, when faced with childlike bodies and an inability to become parents or lovers, will be horrified at what has happened to them.