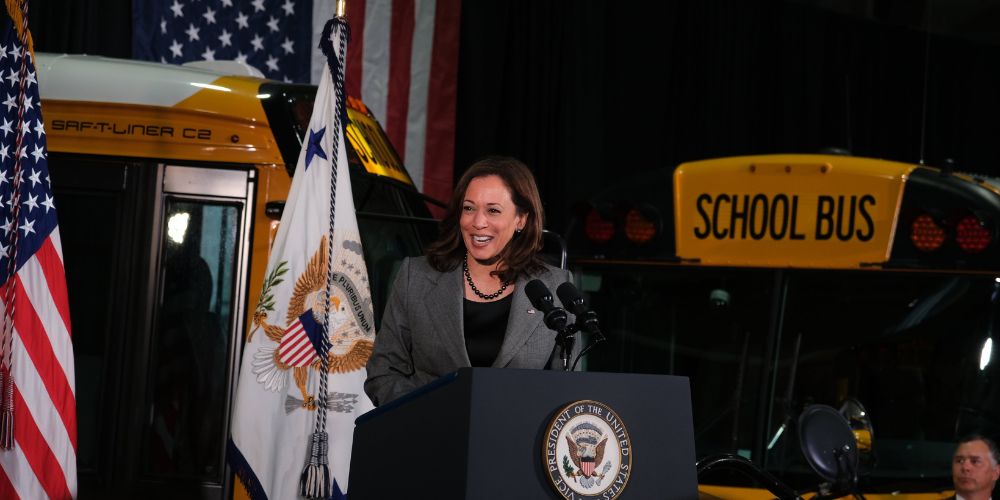 While in Seattle on Wednesday, Vice President Kamala Harris announced a White House initiative to electrify the nation’s school buses. However, in nearby Kent, Wash., all 3 of the district’s electric school buses were out of service.

A source told The Post Millennial that the district “bought 3 electric school buses with the grants that were given out a couple of years ago. All 3 of those buses are out of service today because they cannot get parts for them. They also cannot be serviced by our district mechanics.”

Another source said that many in the district have vowed to “never get electric buses again” because “electric buses are a bad idea. At least one of the buses had been out of service for 8 months.”

According to the Daily Wire, “the $913 million released by the first funding round divided among 2,463 electric buses implies an average cost of more than $370,000 per vehicle, which is twice as expensive as the typical diesel school bus, according to the Philadelphia School District, which added five new electric buses to its fleet earlier this year,” so that the city can save approximately $5,000 on fuel annually.

Many other districts in Washington and across the country are attempting to make the switch to electric. Seattle School District’s newest school transportation provider Zum is aiming to shift its fleet to all-electric vehicles by 2025. In March the company deployed its first six electric buses from Lion Electric in the Bay Area.

Harris flew across the country and then traveled by motorcade to Seattle’s Lumen Field to unveil the Biden administration’s green energy project which will leverage nearly $1 billion from the $1 trillion infrastructure bill Biden signed into law in 2021 for rebates awarded through the Environmental Protection Agency to school districts across the US so that they can purchase “clean” electric school buses and according to a fact sheet, will eventually spend $5 billion on the EPA’s Clean School Bus Program.

The White House said, “School buses safely transport more than 25 million children every day across America. However, diesel exhaust from buses produces particulate matter and other pollutants that can cause lung damage and aggravate asthma and other health problems in children. In addition, diesel exhaust exposure has been linked to increased school absences.”

However, the EPA’s announcement did not address nor suggest solutions for the nationwide bus driver shortage.

The billion-dollar project was announced following the National Assessment of Educational Progress revealing that the average reading scores for nine-year-olds sank five points and average mathematics scores fell seven points after government lockdowns, forced students across the US to stay home and learn virtually for months on end.

Harris’ announcement left many parents wondering why the money was not being spent in the classroom and subjected the VP to a new round of mockery after touting her love of “yellow school buses” during her Seattle appearance.

The VP’s trip comes following other high-profile Democrats being sent out to the Evergreen State, including Jill Biden and Elizabeth Warren, to bolster the flailing campaign of 30-year-incumbent Washington Senator Patty Murray against Republican challenger Tiffany Smiley.