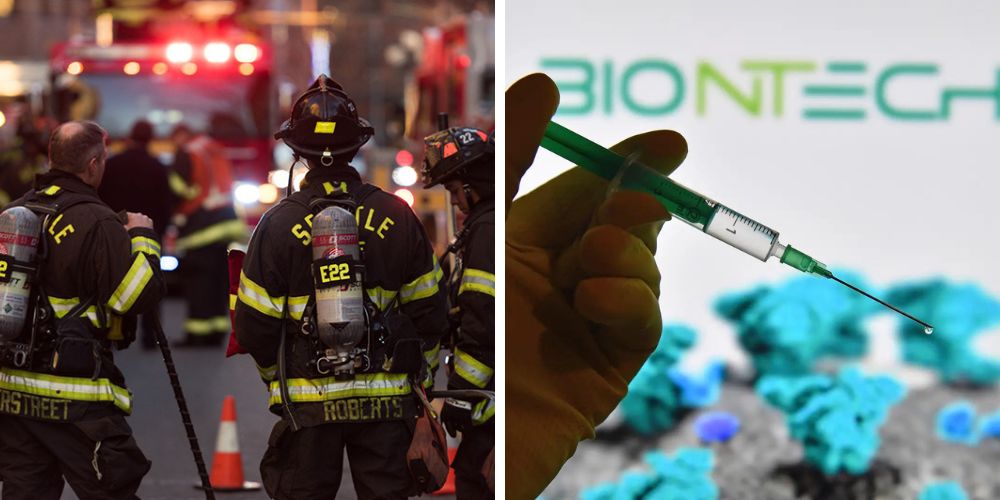 A lawsuit was filed against the City of Seattle and Fire Chief Harold Scoggins on Friday on behalf of two dozen firefighters who were terminated for refusing to comply with the city’s vaccine mandate. The former firefighters are seeking lost wages including their lost benefits and pension rights.

The lawsuit comes on the heels of a suit filed earlier this month which was seeking injunctive relief and a temporary restraining order against the city and Fire Chief Harold Scoggins to prevent any more members of the department from being fired because of the policy. A judge ruled that the terminations must be placed on hold until the results of a hearing in mid-October which will determine the fate of the firefighters, and possibly the city’s vaccine mandate.

According to the new lawsuit, the Seattle firefighters were terminated because although the city through the department acknowledged each of their sincerely held religious beliefs preventing them from receiving the vaccination against COVID-19, they were still denied accommodations for their exemptions.

According to court documents obtained by The Post Millennial, “There is no evidence that Defendants offered or suggested any accommodation” nor “that Defendants made any attempt to eliminate the conflict.”

Additionally, “There is no evidence that the Defendants engaged in any dialogue with the Plaintiffs to find an accommodation,” and the “Defendants acted in a passive and/or generalized manner toward the group collectively and did not engage in a dialogue or attempt to show cooperation in resolving the conflict.”

The suit alleges that “By his own admission, Defendant Scoggins was ultimately responsible for the accommodation or non-accommodation decisions regarding Plaintiffs.”

The suit also alleges that the city and Scoggins “had pre-determined to not accommodate religious exemption employees, including each Plaintiff.” The suit cites sworn testimony by Deputy Chief and Union President for Local 2898 Thomas Walsh obtained by The Post Millennial in which he stated that during the pandemic before the vaccines were available, the Seattle Fire Department had tens of millions of contacts with the public and only a single instance of transmission.

Walsh, the third highest ranking member in the department also stated that “As Deputy Chief, it is apparent to me that the individualized accommodation assessment process and the so-called interactive process was a sham because it was predetermined by the Department that no religious accommodation would be accommodated.”

Deputy Chief Walsh also noted that “despite the termination of all unvaccinated firefighters, the Department had a severe COVID-19 outbreak among its fully vaccinated members and is still dealing with ongoing COVID outbreaks.”

According to court documents, “Assistant Chief Bryan Hastings stated to at least one witness, ‘I just wish the 18th would get here so we could fire everybody and move on.'” It is also alleged by the plaintiffs that “At a meeting on or about October 30, 2021, Adrienne Thompson, of the Seattle Mayor’s office, was asked for written confirmation about the city’s policy, as revealed to City’s Human Resources Leads on or about October 13, 2021, that no accommodations would be given by the city for any religious exemptions.” 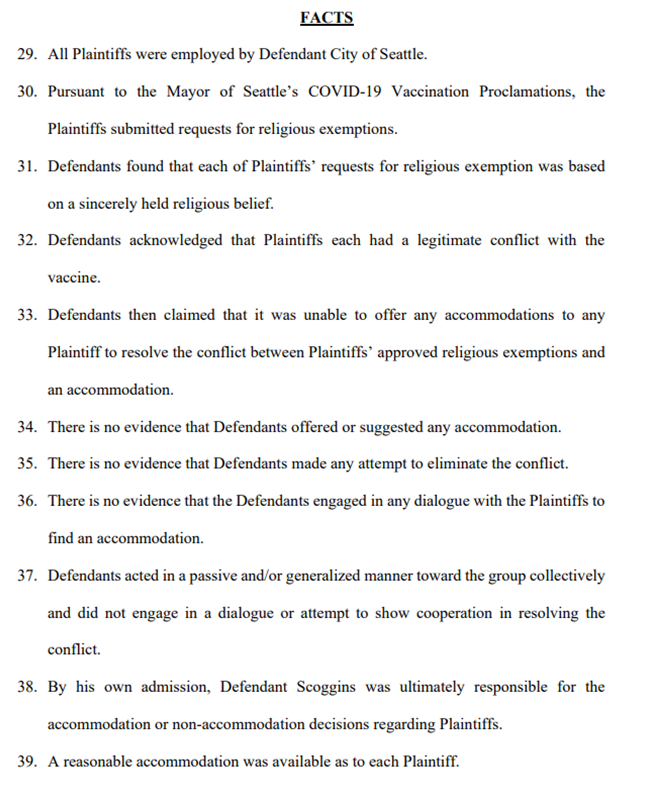 According to court documents, Ms. Thompson, stated: “After talking to the attorneys, we are not comfortable providing such a statement,” and “Ms. Thompson did not respond that the policy of no accommodation for religious exemptions was not the policy of the Mayor of Seattle, or of the City.” 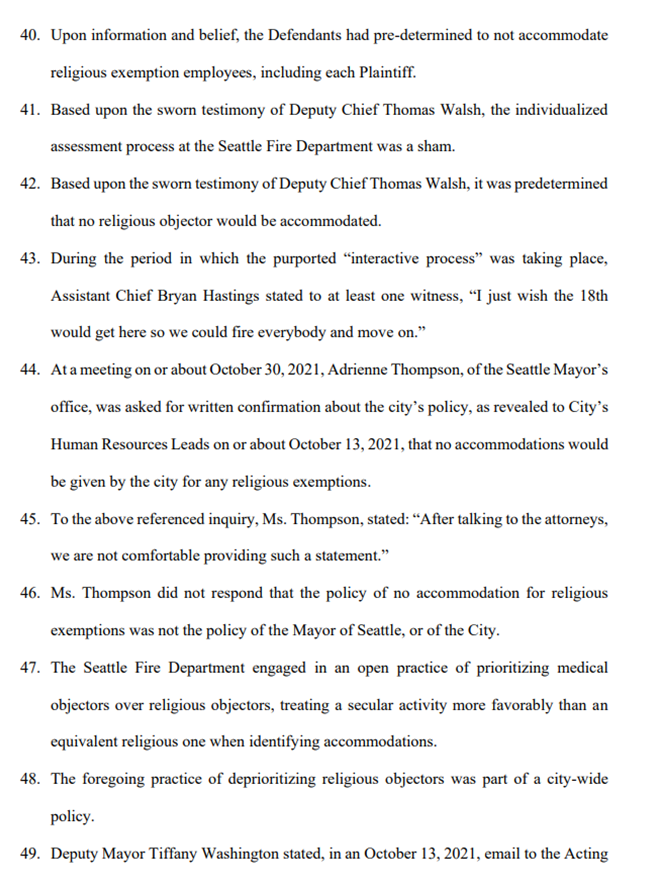 According to the suit, Deputy Mayor Tiffany Washington stated in an October 13, 2021 email to the Acting Director of Seattle Human Services Department, with Ms. Thompson copied, that “the department has to prioritize those with medical exemptions. Once you address accommodations for this group you can move to those with religious exemptions.”

The plaintiffs also allege that “Defendants have investigated breaking the chain of command via email in response to a City-wide email from the Mayor regarding political positions known to be objectionable to certain religious individuals – those who responded directly to the Mayor in agreement were not investigated, those who not did agree with the Mayor’s position were investigated.”

The court documents state that “Even based upon the prior science, the Seattle Fire Department, and Mr. Scoggins were aware that, throughout the pandemic, before the vaccine, there was only one reported case of transmission by or to a Seattle Firefighters and the public.”

By contrast, the Seattle Fire Department has suffered a series of COVID-19 outbreaks since implementing its vaccine mandate and in December of 2021, “the exact accommodations suggested by the religious objectors (e.g. masking, daily testing, isolation, and social distancing) were implemented by the Department.”

The suit also cited Democrat Governor Jay Inslee’s announcement on September 8, 2022, that his declared state of emergency would end on October 31, 2022, and that the vaccine mandate for state workers would be removed for health care workers.

The court documents also cited President Joseph Biden stating in a September 18, 2022, interview: “The pandemic is over. If you notice, no one’s wearing a mask.”

Additionally, on August 11, 2022, the Centers for Disease Control and Prevention issued guidance related to COVID-19 prevention and transmission that declared that both vaccinated and unvaccinated should be treated equally, removed requirements for social distancing and, instead, moving forward, requires a focus on the most vulnerable populations, as well as acknowledging that the mandated vaccine does not stop infection or transmission.

Nathan Arnold, attorney for the firefighters told The Post Millennial, “Seattle public safety is in shambles. The Fire Department is paying unprecedented overtime.”

He added, “This case was also filed before the latest CDC guidance and the court decision regarding the NYPD became public – both buttress our position.” A Manhattan supreme court judge ruled on Friday that New York City cops who were fired because of the city's Covid vaccine mandate had to be reinstated.

Arnold continued, “Even if the CDC had been transparent throughout the pandemic, these Firefighters never should have been terminated and our new Mayor and City Attorney should recognize that.”

Arnold then called out former Mayor Jenny Durkan and Chief Scoggins for their involvement in the deadly Capitol Hill Occupied Protest (CHOP) and the fact that there have been lawsuits and now an ongoing investigation into the missing texts of both from that time period. Recovered texts show the mayor’s office, the chief and former Seattle Police Chief Carmen Best were coordinating with the “warlord of the autonomous zone” Raz Simone.

“If they don’t correct the prior administration’s errors, CHOP, text message scandals, pretending the defund the police but really just changing the name of 911 dispatch, and the baseless termination of these prior ‘heroes of the pandemic,' then this administration owns the scandal,” said Arnold.