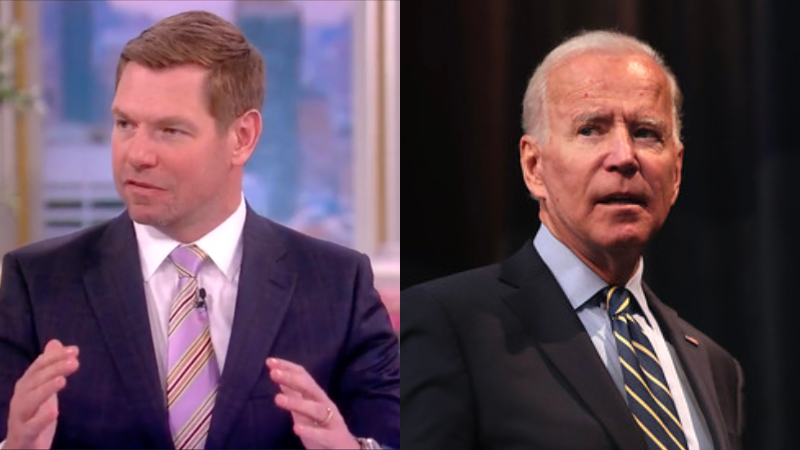 On Wednesday, Rep. Eric Swalwell downplayed the classified documents recovered from President Joe Biden's personal properties, comparing the current head-of-state's document scandal to that of former President Donald Trump's, who he says would “leverage them for his own benefit” from foreign countries.

Swalwell, the Democratic congressman from for California's 14th district, joined left-wing talk show The View to share his thoughts on the approximately 20 documents that were discovered by Biden's lawyers at his former office at the Penn Biden Center in Washington, D.C. and his personal residence in Wilmington, Delaware, from his time as vice president in the Obama administration.

The left-wing representative, who was recently booted from the House Intelligence Committee for reasons including his ties to Chinese spy Fang Fang, started off by saying that both instances of presidents holding on to classified material are a “problem.”

“Well, anytime classified materials are outside of what's called a Secure Compartmentalized Information Facility… That's a problem,” Swalwell said. According to ABC News, the administration, including Biden himself, has been ducking questions about the documents and the subsequent special counsel investigation into their discovery.

“… Special counsel, I think it's absolutely appropriate,” Swalwell continued, before praising Biden for returning the documents.

“This case will hinge on his knowledge and intent. It looks like once he was aware of this, he did what I hope everyone would do, which was get the documents back to the government, cooperate in every meaningful way,” he said, before comparing the instance to the FBI raid on Mar-a-Lago in which agents seized about 13,000 documents, 103 of them classified and 18 of them top secret, from Trump.

“I know it's natural to compare this to what the former president has done, where it looks like he wanted to keep the documents, and is litigating that and fighting in the courts,” Swalwell continued.

He then implied that Trump would possibly use them to raise his foreign influence.

“What worries me with President Trump is that somebody who was willing to leverage $350 million of taxpayer money to get dirt on his opponent as he did with the Ukrainians, if he has top secret documents in his possession, that he could leverage that for his own benefit.”

“But again, I think treat them both the same. Give independent analysis and independent scrutiny, and see where it goes,” the California congressman concluded.