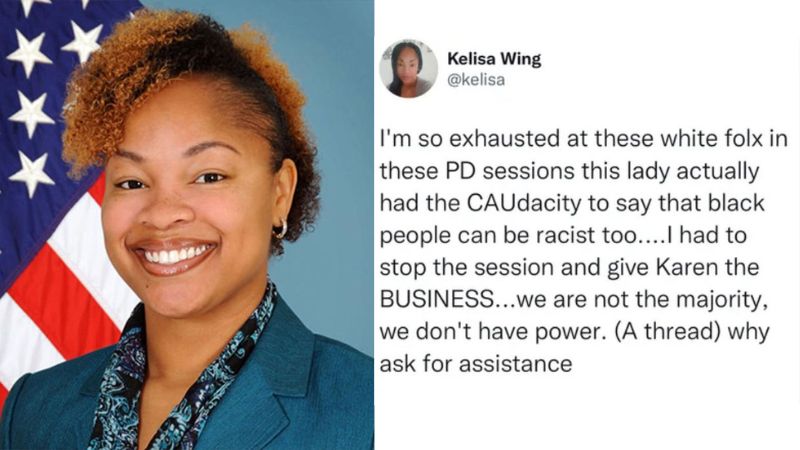 The Department of Defense has said that they are launching a review into a self-proclaimed “woke” diversity chief after social media posts ridiculing white people began receiving backlash on social media.

According to Fox News, the chief diversity, equity, and inclusion officer at the Department of Defense Education Activity (DoDEA) Kelisa Wing, who calls herself a “woke administrator” posted a number of tweets spanning years on social media disparaging white people.

In one post, from July of 2020, Wing wrote, “I’m so exhausted at these white folx in these PD sessions this lady actually had the CAUdacity to say that black people can be racist too,” using the word as a play on Caucasian.

“I had to stop the session and give Karen the BUSINESS … we are not the majority, we don’t have power,” Wing, who is black, added.

In a statement to Fox News, Cmdr. Nicole Schwegman, said, “We are aware of news reports concerning an official at DoDEA. The office of the Under Secretary of Defense for Personnel and Readiness is reviewing this matter.”

“Diversity, Equity and Inclusion efforts in… [DoDEA] are an important part of building and sustaining an organizational culture where all students, educators, and staff are valued and respected,” the spokesperson said. “Our focus remains on ensuring military-connected students, their families, and our employees have equitable access to opportunities and resources that support student achievement and readiness for college and careers.”

Wing’s Twitter and LinkedIn accounts have since been deleted, but according to a download of her professional account profile obtained by Fox News, Wing has worked at the DOD for 16 years, and had been promoted to DEI chief in December of 2021.

Wing wrote in response, “If another Karen tells me about her feelings… I might lose it…”

In another Twitter post, Wing responded to a user that was criticizing an article from Wing demanding that teachers take part in “dismantling racial oppression,” and where she said that “racism is ingrained in the very fabric of our country.”

Wing has previously used the word “Karen” to refer to Trump, calling him the “whole boy version of a Karen,” and to former Secretary of Education Betsy DeVos, calling her “the queen of Karens.”

When Wing was promoted to chief, the department said that Wing  “has been involved with diversity, equity and inclusion efforts for… schools over many years, authoring several books on the topic.”

Wing has written a number of books aimed at children in a series called “Racial Justice in America.” Titles include “What is the Black Lives Matter Movement,” “What Does it Mean to Defund the Police?,” “How Can I Be An Ally?,” “What is White Privilege?” And “What is Anti-Racism?”

The children’s book “What is Anti-Racism?” Includes a number of misleading statements, according to Fox News.

The book claims that “the modern idea of ‘race’ was introduced by the National Party in Germany,” excluding the word “Socialist” from the Nazi party’s name. The idea of race had been used in eugenics for years before the Nazis rose to power, and the views of eugenics had been utilized by the Nazis within their core ideology.

Contradicting herself though, the book claimed also that “race” was born on American soil.

Speaking on Wing’s promotion to chief, the director of DoDEA, Thomas Brady applauded Wing’s efforts, saying that she is “exactly the right person” to lead efforts within the department.

“Kelisa Wing is exactly the right person to lead our efforts in building on the foundational work done to support meaningful change in our organization.”

“This new position will take a holistic approach to identifying and improving how we integrate the practice of diversity, equity and inclusion in every aspect of DoDEA, from curriculum and assessment to hiring and professional development,” he continued.

According to the Daily Mail, Wing’s office oversees schooling for the children of Pentagon employees, as well as students of families deployed overseas.