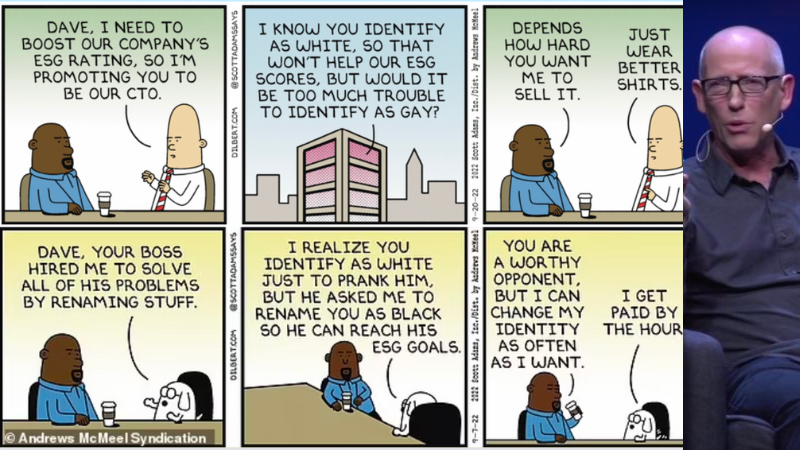 Author of the newspaper comic strip “Dilbert” Scott Adams has revealed that his work has been removed from nearly 80 markets.

Speaking with Fox News, Adams revealed that “Dilbert,” a comic that he has written and illustrated since 1989, is no longer being printed by Lee Enterprises, which owns nearly 100 papers across the country.

“It was part of a larger overhaul, I believe, of comics, but why they decided what was in and what was out, that's not known to anybody except them, I guess,” Adams told Fox News.

The comic series, which makes fun of office culture and themes within the workplace, appears in thousands of newspapers across 57 countries, and is published in 19 languages.

The popular comic strip has spawned books and calendars based off the series, with more than 20 million being sold.

Adams told Fox News that “Dilbert” wasn’t the only comic strip that faced the chopping block, with other strips being canceled by the outlet, though the decisions as to which ones they were getting rid of were made individually.

In recent strips, Adams has poked fun as Environmental, Social, and Governance [ESG] issues, and introduced a new character named “Dave,” who is black but identifies as white.

Describing the character, Adams said that Dave is named after his brother, and is a prankster that like to mess with his boss, who is happy to have met his diversity quota in hiring Dave.

“All of the wokeness and anything that permeated from ESG… so that stuff made its way into the business world, and then it became proper content for Dilbert,” Adams said. “The problem is that people see that even though it's a workplace-related joke, but it's more about how they implement it.”

Adams told Fox News that some newspapers had received complaints regrading the contents of “Dilbert,” but said that he wasn’t sure whether those complaints had anything to do with the comic being removed. He has said though that the cancellation has dealt a “substantial” financial blow to him.

In a comic that was published on Tuesday, the supervisor is seen explaining how to increase the company’s ESG rating to Dave.

“Dave, I need to boost our company's ESG rating, so I'm promoting you to be our CTO. I know you identify as White, so that won't help our ESG scores, but would it be too much trouble to identify as gay?” The supervisor asks.

“Depends on how hard you want me to see it,” Dave responds.

“What I do is I talk about how the employees handle the situation. It's not about the goal of it. But that's enough to make people think that I must be taking sides politically,” he said.