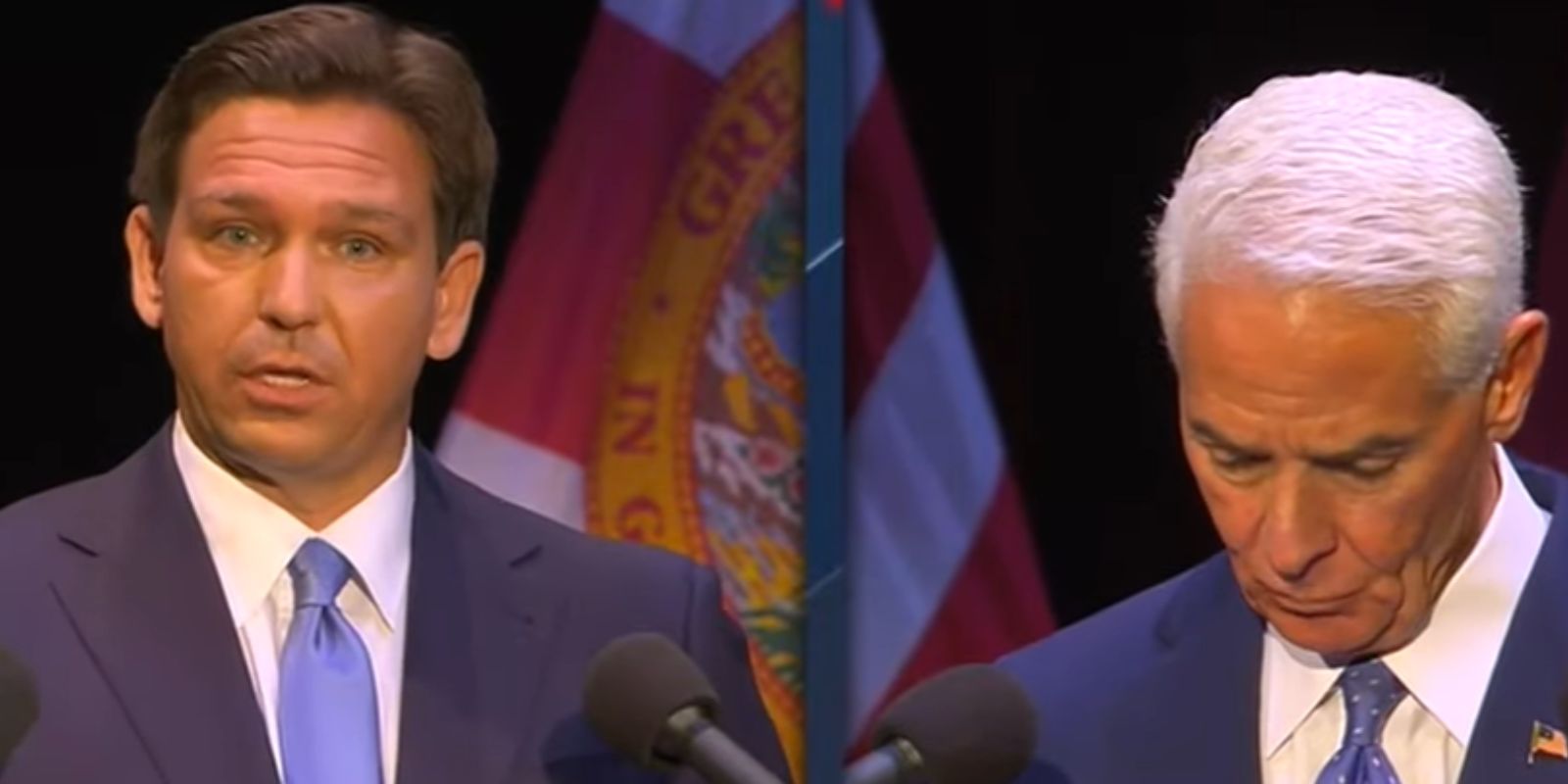 Florida Governor Ron DeSantis participated in Florida’s gubernatorial debate against former Governor Charlie Crist, who is running as a Democrat after having served as a Republican and as an Independent.

DeSantis pressed Crist for opposing the Parental Rights in Education Bill, which prevents the teaching of radical gender ideology to young students. DeSantis accused Crist of engaging in a culture war.

“When you opposed the parents’ rights in education bill, which prevents six, seven, and eight-year-olds from having sexuality, gender ideology injected in their curriculum,” said DeSantis. “You are the one that’s waging a culture war. I’m simply defending parents and students because it’s inappropriate to have that at elementary school, it’s inappropriate to tell a six-year-old that they were born in the wrong body, it’s inappropriate to tell an 8-year old that they may have been born a girl but maybe they’re a boy. We need to teach them the basics, to read, write, add, and subtract. If we do that we’ll continue to read in fourth-grade reading and math,” said DeSantis.

“I also signed… legislation protecting the rights of women athletes, that you should not have someone competing on the men’s team for three years and then switch to the women’s team. Crist opposed that bill, he said he would have vetoed it. I’m going to protect women’s sports in the state of Florida,” DeSantis said.

Crist accused DeSantis of engaging in culture wars, calling himself an “uniter.” Crist then said that DeSantis was a divider, “whether it’s blacks against whites, whether it’s gay against straight, whether it’s young versus old. You’re making it harder for people to vote in our state. You know, we just started early voting today, and he made it harder to mail in ballots?” said Crist, who called DeSantis “anti-Democracy.”

Later on, when discussing gender, the moderator stated, “the Florida Department of Health has held firm that there are risks associated with certain puberty-blocking and hormone therapies for children, despite pushback from the federal government and other states… Where do you stand on so-called gender-affirming medical procedures and therapies?”

DeSantis answered: “‘So-called’ is important because when they say gender-affirming care, they mean giving puberty blockers to teenage girls and boys. They mean doing double mastectomies on young girls, they mean chemically castrating young boys. That is wrong, we are not going to allow that to happen in the state of Florida.

“A lot of kids go through a lot of different things, a lot of the dysphoria resolves itself by the time they become adults and we have a number of people that have spoken out in favor of what we’re doing to say you should not mutilate minors. They went through this when they were minors, and now they’re adults and they regret it. Other countries in Europe that went down this road have now backtracked, we’re doing the right thing. It’s inappropriate to be doing, basically, what is genital mutilation.”

Crist responded to DeSantis by saying that it reminded him of his position on a woman’s right to choose.

“You think you know better… than any doctor and any woman in the position to make decisions about their own personal health, you want to be the judge,” said Crist. “You want to decide what people should do with their own physical being, with the betterment of their health.

“I believe that we need to do unto others as we would have done onto us, it’s called the golden rule, and if you ever knew the golden rule, clearly you’ve forgotten it. You don’t have the temperament to be kind and decent to other people who don’t look like you, who don’t act like you, and don’t contribute to you,” he said, to a mixed reaction from the audience.

Crist went on to say that DeSantis wanted to control people’s bodies, specifically women, to which DeSantis said that young teens aren’t in the position to know if they should have “radical procedures that physically alter their body.”

“If you’re a fifteen-year-old, you can’t go get a tattoo in the state of Florida, but we’re saying you can get a double mastectomy? Of course not.”

On the opiate crisis and border security, DeSantis said that he was working to help addicts via addiction stabilization centers.

“I signed legislation raising the penalties for people that are trafficking fentanyl… If you’re trafficking that garbage, that poison, you’re killing people in our state and we’re going to treat you like the murderer that you are,” DeSantis said to applause.

Crist, in response, noted his time as Attorney General of Florida. “We’re talking about enforcing our laws, making sure that we have leaders that understand that these laws are in our books for good reason. So what you need to do is have somebody as an Attorney General. I served as Attorney General, the top cop of Florida. I understood in that role how important it was to enforce our laws, and we did it day in and day out,” Crist responded, noting that crime has increased under DeSantis, and added that DeSantis wouldn’t ban “assault weapons” to keep “our children safe.”

DeSantis slammed Crist over having previously said that funds should be reallocated away from police, saying “Charlie Crist has endorsed the idea of ‘reallocating funding away from the police.’ I guess to give to social workers, but if someone’s robbing your house, you don’t want a social worker coming to help you, you need the police. That’s why all these police groups are endorsing me, and they’ve said that Crist’s crime policies are very dangerous.

“He used to be tough on crime six political parties ago,” DeSantis said, “but now he’s admitted that he’s softened up on crime, and we’ve seen what’s happened all across the country. People are moving to Florida because we’re a safer state than the California and New Yorks of the world.”

“You allege that I want to defund the police?” said Crist, noting that he as a congressman voted for $200 billion to go to law enforcement across the country.

The two found some common ground on the issue of Marjory Stoneman Douglas mass shooter Nikolas Cruz, who was sentenced to life in prison without parole. Both Crist and DeSantis agreed that Cruz should have been sentenced to death.

“This is one thing we actually agree on,” said Crist. “I believe that that young man should have gotten the death penalty for killing 17 innocent students in our schools. It was abhorrent and you have to do what’s right.”

DeSantis agreed and said that Cruz deserved “the ultimate punishment.”