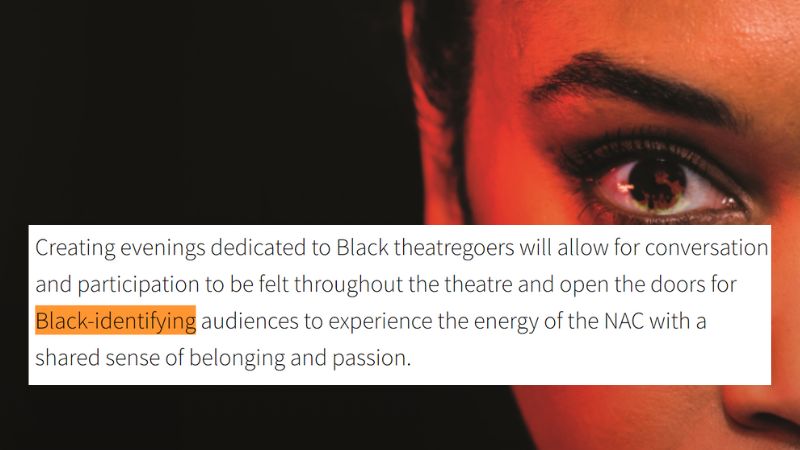 Canada's National Arts Centre English Theatre in Ottawa, Ontario, announced that it will host blacks-only event, in what they have dubbed a “black out” night.

In a post, the theatre writes that it will have showings of “Is God Is.” The blacks-only screenings can be attended by those who identify as black. The listing states, “On February 17, the evening’s performance of Is God Is will welcome an all-Black identifying audience to experience and enjoy a performance in the Babs Asper Theatre.”

The post continues, “A Black Out is an open invitation to Black Audiences to come and experience performances with their community. The evenings will provide a dedicated space for Black theatregoers to witness a show that reflects the vivid kaleidoscope that is the Black experience.”

It continues: “Creating evenings dedicated to Black theatregoers will allow for conversation and participation to be felt throughout the theatre and open the doors for Black-identifying audiences to experience the energy of the NAC with a shared sense of belonging and passion.”

Quillette editor Jon Kay brought the event to the attention of a wider audience in a Twitter thread, where he wrote that while this event is only for blacks, he is “sure other races will get their turn.”

“I have contacted @CanadasNAC just to confirm that their anti-racial-mixing policy for this event prohibits mixed-race couples,” Kay continued.

The event's description would suggest that Indigenous peoples would not be able to attend the event. This is despite a clear notice on the NAC's website that offers a land acknowledgement, which reads: “We would like to recognize the Algonquin Anishinabeg Nation, on whose traditional unceded territory the National Arts Centre is located. We gratefully acknowledge them as the past, present and future stewards of this land.”