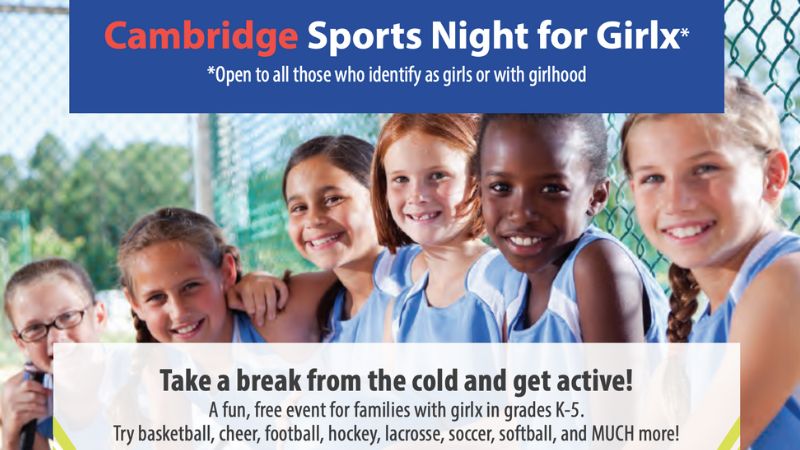 The city of Cambridge in Massachusetts is set to hold a sports night for “girlx,” which they state is “open to all those who identify as girls or with girlhood.”

“Take a break from the cold and get active,” the flyer for the January 18th event states. “A fun, free event for families with girlx in grades K-5. Try basketball, cheer, football, hockey, lacrosse, soccer, softball, and MUCH more!”

The flyer goes on to state that “girlx who play sports” are “more likely to get better grades,” “have higher levels of confidence and self-esteem,” “develop critical skills necessary for success in the workplace,” and “build a larger community of friends across Cambridge.”

Twitter users slammed the event, drawing parallels between “girlx” and the usage of “Latinx.”

“Latinx” is a term pushed by those who say the traditional terms “Latino” and “Latina” are gendered, and therefore offensive.

However, the term has largely been rejected by those within that community, with many native Spanish speakers saying that the term makes no grammatical sense in spoken context.

The event comes as women’s spaces, and women’s sports in particular, have seen increased attention and backlash toward the inclusion of biological male athletes.

This inclusion received nationwide backlash last year after UPenn swimmer Lia Thomas, a biological male, was seen rocketing through women’s ranks after a meager finish during Thomas’ last season competing as a male.

Thomas went on to place first in the Women's 500 freestyle at the NCAA Championships last spring, but the attention regarding biological males in women’s sports didn’t stop there.