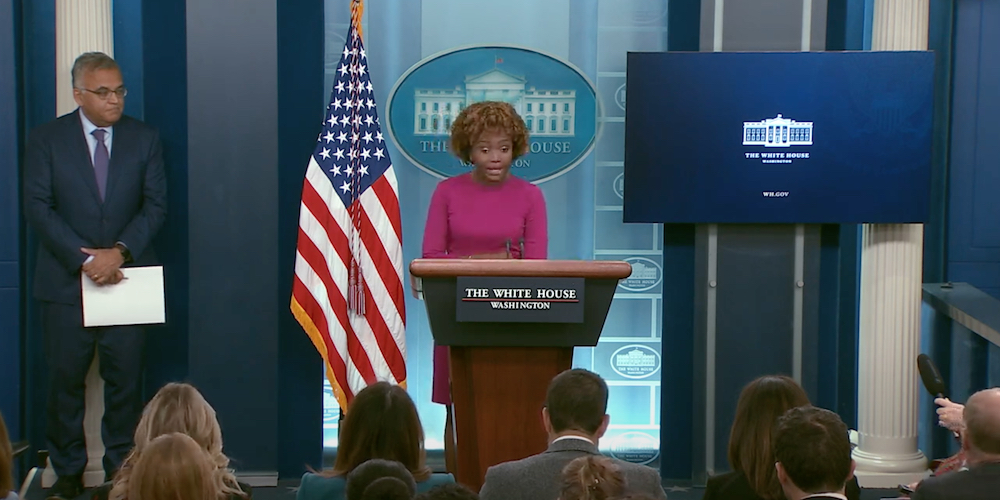 At the top of Tuesday’s White House press briefing on Tuesday, White House Press Secretary Karine Jean-Pierre told reporters her own “coming out” story in honor of National Coming Out Day.

This was the sum total of Jean-Pierre’s announcement about National Coming Out Day. She revealed her personal story about how she came out as a lesbian to family and friends.

“Like so many in the LGBTQ community,” she explained, “coming out wasn’t an easy thing to do. My family was traditional and conservative; being gay in my family wasn’t something that you mention out loud or celebrated.”

She went on to detail how her family grew to accept who she was and who she loved, adding that, “the beauty of America is its freedoms, and the promise that you can achieve your dreams, no matter your race, sex, country of origin, sexual orientation, or gender identity.”

“This is something we continue to strive for,” she continued, suggesting there was a “wave of anti-LGBTQ legislation” being pushed across the country.

She thanked President Biden for supporting the LGBTQ community, and vowed that as an administration, they will “continue to stand with those who come out, and … those who are thinking about coming out.”

White House Covid-19 Response Coordinator Dr. Ashish Jha, who had been patiently waiting at the edge of the stage, was then invited up to the podium to deliver his remarks.

Citing the upcoming holidays and seasonal changes, he urged Americans twelve years and older to get an updated Covid-19 shot, as well as their annual flu jab.

Dr. Jha went on to note that the pandemic was waning, and attributed the successful handling of the virus to President Biden.

Once back on stage, Jean-Pierre got into discussing Russia’s continued aggression in Ukraine, and the ongoing protests in Iran.