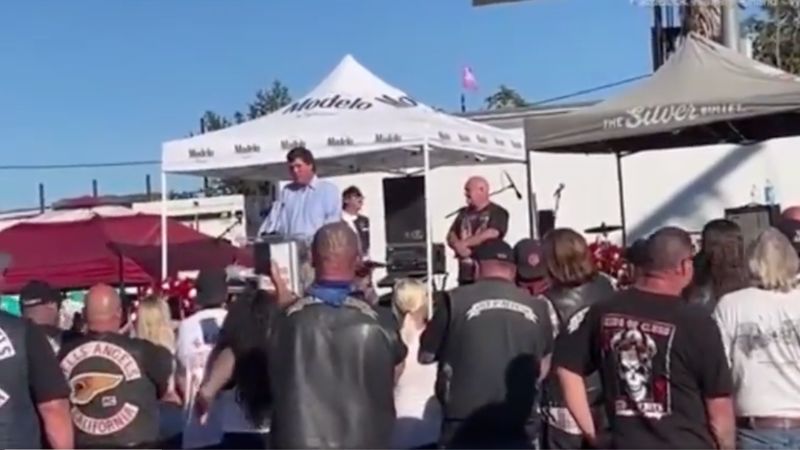 Tucker Carlson made a surprise appearance on Saturday to deliver a tribute at the funeral of Hells Angels biker gang founder Sonny Barger in California.

Carlson said what he learned from Barger, “Stand tall, stay loyal, remain free and always value honor. And I thought to myself if there is a phrase that sums up more perfectly what I want to be, what I aspire to be, and the kind of man I respect, I can't think of a phrase that sums that up more perfectly than that,” Carlson added, “that came from Sonny Barger the famous outlaw biker.”

Mark Hemingway wrote, “This is the most Tucker thing ever.”

Ralph ‘Sonny' Barger, who was from Modesto, California, died at the age of 83 in June from a battle with throat cancer. A crowd of over 7,000 assembled at the Stockton 99 Speedway for Barger's funeral.

Carlson expounded on how the Hells Angels inspired his love for motorcycles and “I thought those guys are cool” when he would see them on the street. The Fox News host lamented that President Joe Biden doesn't express the same patriotic ideals articulated by Barger.

According to the Daily Mail, the Hells Angels is considered an organized crime syndicate by the US government.

Barger, along with the club he led, faced multiple criminal charges over the years and had many convictions.

Under his leadership they forced, at gunpoint, the Rolling Stones to continue a concert at Altamont Speedway, near San Francisco, in 1969. The Stones wanted to quit because the club had stabbed to death an 18-year-old attendee.

Barger was convicted at various times for guns and narcotic charges and was indicted for many others, including racketeering.

Hells Angels members have been accused and convicted of a variety of other violent crimes including rape.