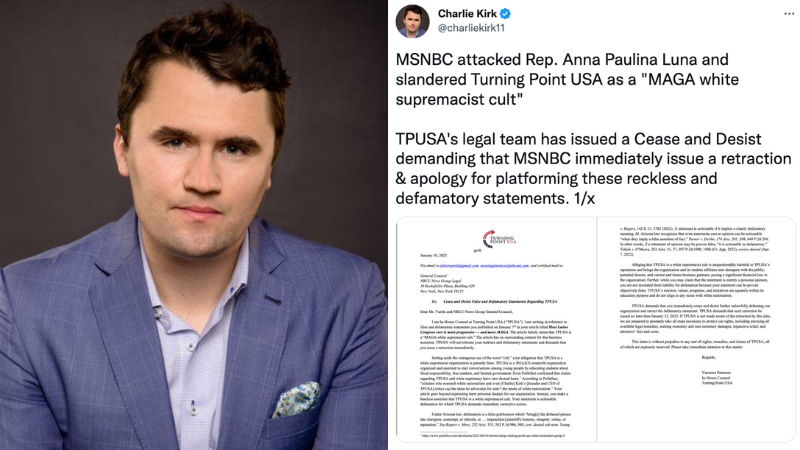 On Tuesday, MSNBC was delivered a cease and desist letter regarding an article that described Turning Point USA as a “MAGA white supremacist cult.”

“The article has no surrounding context for this baseless assertion. TPUSA will not tolerate your reckless and defamatory statements and demands that you issue a retraction immediately,” the letter adds.

“She has ties to chief Kevin McCarthy opponent, Rep. Matt Gaetz, R-Fla., and has worked with what I consider to be a MAGA white supremacist cult: Turning Point USA. There is also the moment in 2019, the year before she decided to first run for Congress, when she decided to stop using her married name Gamberzky and changed it to Luna,” the article states.

“Setting aside the outrageous use of the word ‘cult,' your allegation that TPUSA is a white supremacist organization is patently false,” Peterson added, noting that Turning Point USA is a 501(c)(3) nonprofit organization.

“Even Politifact confirmed that claims regarding TPUSA and white supremacy have zero factual basis. According to Politifact, ‘scholars who research white nationalism and even [Charlie] Kirk’s [founder and CEO of TPUSA] critics say the ideas he advocates for aren’t the tenants of white nationalism.'”

“Your article goes beyond expressing mere personal disdain for our organization. Instead, you make a baseless assertion that TPUSA is a white supremacist cult. Your statement is actionable defamation for which TPUSA demands immediate corrective action,” Peterson continued.

Citing Arizona law, Peterson said that the allegation is “unquestionable harmful to TPUSA’s reputation and brings the organization and its student affiliates into disrepute with the public, potential donors, and current and future business partners, posing a significant financial loss to the organization.”

In response to the allegations made by MSNBC, the letter demands that “you immediately cease and desist further unlawfully defaming our organization and retract the defamatory statement,” with Peterson stating that the retraction should be made no later than January 12.

“If TPUSA is not made aware of the retraction by this date, we are prepared to promptly take all steps necessary to protect our rights, including pursuing all available legal remedies, seeking monetary and non-monetary damages, injunctive relief, and attorneys’ fees and costs.”

“TPUSA, our students, our supporters, and our alumni like Rep. Paulina Luna will not put up with MSNBC and woke contributors like Julio Ricardo Varela when they slander us and our movement. We will advance this legally until we receive a full retraction and apology,” wrote Kirk on Twitter.

This is not the first time TPUSA has had to threaten legal action after false statements were made regarding the organization.

In July, the organization threatened legal action over statements made on The View. Shortly after TPUSA’s Student Action Summit in Tampa, the show’s hosts attempted to connect Nazi protestors outside of the building to the proceedings going on inside.

The show’s hosts had to issue three apologies regarding their initial statement, as well as ongoing statements that were made.