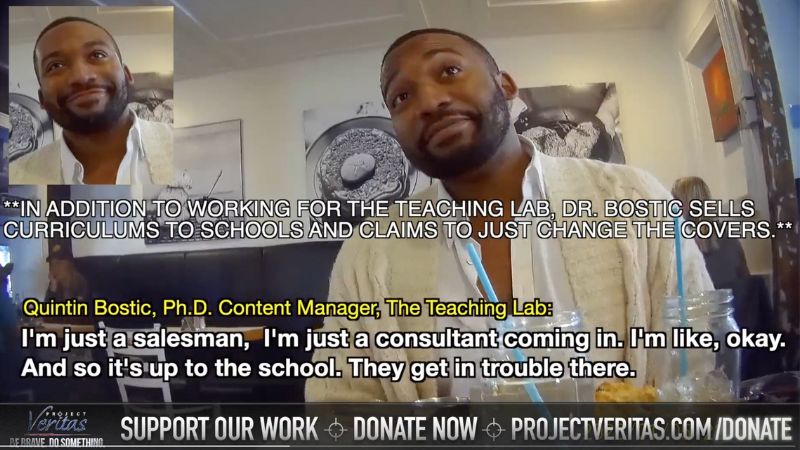 In part two of Project Veritas's expose on Teaching Lab Director Dr. Quinton Bostic and his employer, Bostic revealed how the non-profit Teaching Lab is a “scam lab,” taking money for curriculum treated under grants.

“So just imagine you have a hundred schools in the school district, each of them needs like five of these curriculums, that’s at $20,000 over and over and over.

“And then, guess what, next year there’s going to be version two that you have to have, and then the year after that is version three.”

Later in the conversation, the journalist asked if the schools needed the curriculum, or if it was just preference.

Bostic, who called himself a “black queer voice” said that schools are interested in what he writes about, which he said “I’m like, sure — I could say this is $50,000. I’m like, perfect. We’ll pilot it.”

“And that’s state money, does that get you in trouble at all?” the journalist asked, to which Bostic shook his head no.

When the journalist how so, Bostic replied, “I’m external… I’m just a salesman, I’m just a consultant coming in. I’m like, okay. And so it’s just up to the school. They get in trouble there. That’s not on me.”

In another clip, the journalist told Bostic, “it’s money – and I mean whether you care about teaching or not, it’s a good gig.”

“And literally, I have people on my team who have never taught before, but know sales, they could sell things,” Bostic replied. “And guess what, it works.”

Bostic said that fellow employees have said “I hate kids,” to which he told them to keep it to themselves.

Bostic also revealed that novelist and philanthropist MacKenzie Scott donated around $250 million to the Teaching Lab, but added that “you’ll never see her.”

“But, because she did her non-profit work, she’s in with the funders. That’s how she — literally how she knows these funders, she’s like my capstone’s with the Gates Foundation.”

The journalist asked whether Johnson could get in trouble for that, to which Bostic replied, “you know, it’s borderline. She won’t answer it and she never will. I don’t think she ever will.”

“But, I asked her one time. I said, ‘hey Sarah,' I said, ‘I just want to be very transparent because I’m learning from you. I want to do the same exact thing that you’re doing.' I said, ‘so hypothetically, these people are funding you to build a program. Once the grant is over, you take the program and you sell it to people for money.' and I was like, ‘Is that legal?'”

“Is it really a teaching lab?” the journalist asked.

Speaking undercover with Johnson, O’Keefe questioned her over the phone on the Teaching Lab’s annual budget, to which Johnson replied “we have a $15 million budget right now.”

Johnson also revealed that DEI (Diversity, Equity, and Inclusion) work is “a major part of our mission.”

In Tuesday’s Project Veritas video, Bostic revealed how he was selling critical race theory curriculum to Georgia schools under the label of “DEI,” despite the state having a ban on those teachings in schools.