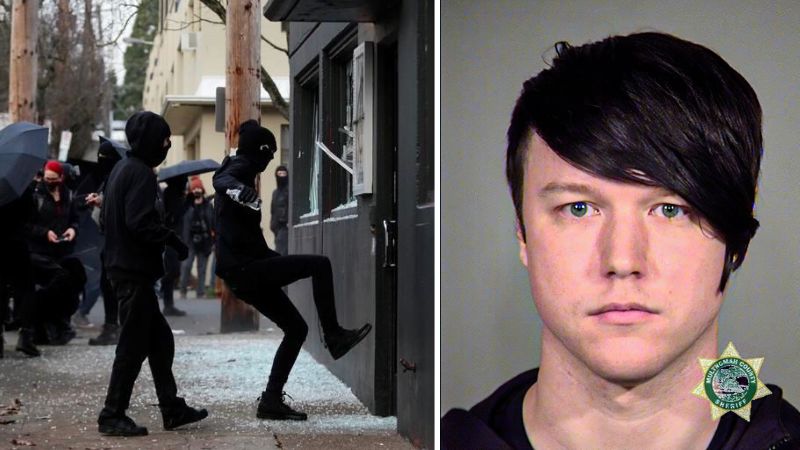 Portland Antifa member Darrell Anthony Kimberlin pleaded guilty on Wednesday to riot and criminal mischief in the Second Degree for vandalizing the Democratic Party of Oregon headquarters, as well as multiple businesses in the southeast of the city over the first few months of 2021.

A Multnomah Circuit Court judge sentenced Kimberlin on Wednesday to 18 months of probation and ordered that he pay nearly $50,000 to the multiple businesses that he damaged.

“In January [2021], Kimberlin vandalized the Democratic Party of Oregon headquarters in Southeast Portland by breaking windows and tagging the building with spray paint. In February 2021 Kimberlin vandalized a Chipotle, an Umpqua Bank, and property belonging to a security company,” a press release from Multnomah County District Attorney’s office spokesperson, Elisabeth Shepard, read.

“Kimberlin’s extremist political views fueled him to commit crimes. Those crimes landed him with a bill to pay back the very institutions his ideology decries,” the press release added. “There is a bright line between freedom of speech and criminal intent. Kimberlin’s actions were on the wrong side of that line, and now he’ll face the consequences. Justice was served today.”

In January 2021, Antifa rioters, including Kimberlin, trashed the Democratic Party of Oregon headquarters in Southeast Portland in broad daylight, smashing windows and doors and vandalizing the building with graffiti that reads “F*ck Biden.”

The J20 protest, which followed Joe Biden’s inauguration, saw about 200 Antifa activists marching through the streets getting increasingly violent. At one point Antifa activists grabbed an officer’s bike and began throwing things, forcing the police to retreat.

J20, or Disrupt J20, was organized to protest the inauguration of President Donald in 2017. The event was picked up again four years later, as Antifa and many on the far left do not support President Biden or his administration.

In February 2021, a little over a month after the J20 gathering, a Saturday night Antifa protest to “abolish deportations” also quickly turned violent. Protesters marched along Portland’s Pearl District, where they vandalized businesses and mobbed police officers.

Following warnings from the Portland Police to “immediately stop participating in criminal activity,” the group swarmed and mobbed a bike officer who was responding to the riot, telling him to “get the f*ck out of here. This is native land.”

After most of the rioters dispersed, a smaller group then moved to an ICE Detention Facility, where they vandalized and emptied out trash cans.

Kimberlin will not face any prison time for his violent actions.