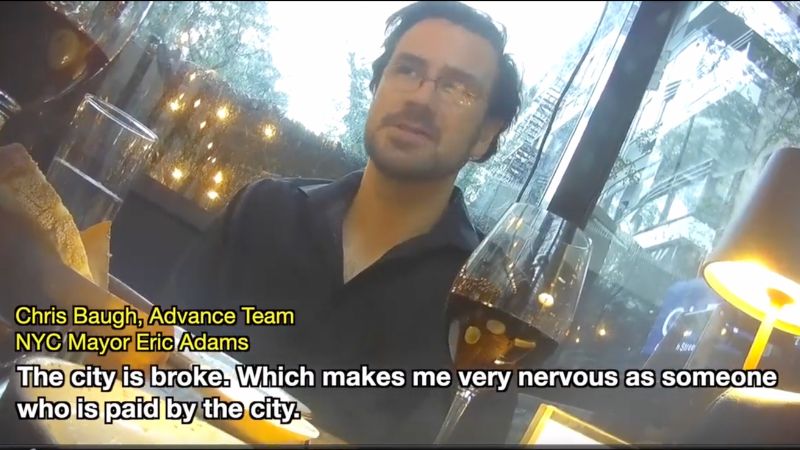 A new video from Project Veritas Action has revealed that New York City Mayor Eric Adams’ top aide has doubts about the mayor’s ability to handle the ongoing illegal immigrant crisis in the city, a result of the border crisis created by the Biden administration.

Chris Baugh, a member of the Advance Team for Adams, spoke with an undercover Project Veritas journalist, revealing how delicate the situation is in the city currently.

“Frankly, I don’t know how much Biden is going to appreciate having a mayor be like, ‘Hey, you owe blue cities money because of this migrant crisis.’ Like, eventually that’s going to make Biden look bad. We’re a month out from the midterms and he is not going to like that. It’s a very perilous situation for him and I don’t know that Eric Adams is capable enough to navigate it.”

Baugh continued on to say that the situation is “ultimately” a struggle with the city’s Right to Shelter laws.

Noting that the law was intended to keep homeless New Yorkers off the streets at night, Baugh said, “the law is not designed to say, like, ‘we want asylum seekers to come to New York City.' That’s not the design of the law.”

When asked if the city could just amend these laws, Baugh said that Adams’ office is “choosing not to.”

Baugh said that if Adams were to do this, or to place a cap on the number of immigrants allowed into the city “everyone would resign.”

Responding to the journalist’s question about how many the city will take, Baugh said, “all of them. Like, we don’t like it, but we’ll take as many as they keep sending.”

“I think the optics of this are bad for Biden and bad for the mayor, and I think Biden saying, ‘Alright, I’m just gonna give money to New York City because they can’t take care of these migrants’ is just gonna be bad politics for him,” said Baugh.

Baugh also stated that “the city is broke,” adding that this point “makes me very nervous as someone who is paid by the city.”

He said the city is anticipating a $10 million budget deficit by 2026, and that the free money received over the pandemic is “gone.”

When asked about the option of raising taxes to deal with the influx of illegal immigrants, Baugh said that while it is in fact an option, Adams “doesn’t want to.”

“Or we could, like, reduce services,” Baugh continued. “Like, just not give people enough stuff… I don’t know, pick something, Department for the Aging, immigrants, like, we’re housing immigrants now from Texas. It would be very easy to be like ‘nope, not anymore.”

“No one has any reason to believe a work from an enterprise run by a convicted criminal and one that admitted to lying in an effort to even have a conversation with a member of our team.”