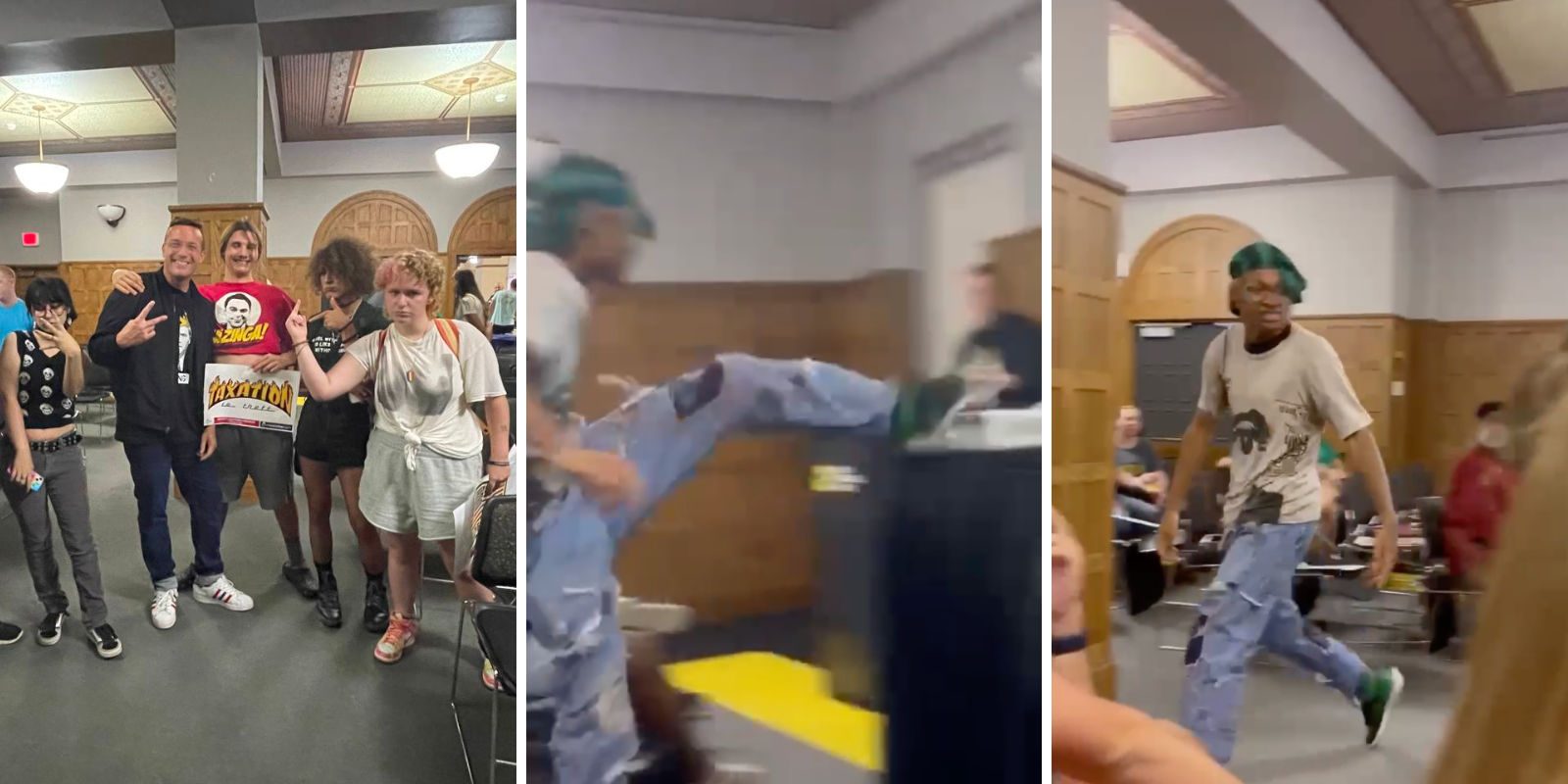 A Tuesday night University of Iowa event featuring TPUSA contributor Benny Johnson was violently interrupted by a man who drop-kicked a table and a video projector, and, according to eyewitnesses, was arrested.

Johnson was speaking on the subject of memes when his presentation was disrupted by a young man wearing a green bandana on his head. Footage shows the man reacting to a Kamala Harris meme by yelling “Racist *ss b*tch! F*ck you!” after drop-kicking and destroying a projector.

Footage taken outside the event shows the individual getting arrested and being escorted away by police.

Shortly after the event, Johnson tweeted: “BREAKING: I was Giving a speech about MEMES at the University of Iowa tonight with
@TPUSA. A Kamala Harris Meme TRIGGERED the violent LIBS so bad they ATTACKED the *projector* and SMASHED IT to pieces. I told you: The Left Can’t Meme”

Johnson is currently on a tour of American campuses under the title “Meme Wars” where he discusses how conservatives can fight back in the culture wars by unlocking the power of meme magic.

Despite the violent incident, the event continued, and Johnson even took photos with far-left attendees, who made vulgar gestures.

“We often say The LEFT CAN’T MEME.
Tonight, we proved it,” Johnson said in a statement. “I was giving a peaceful speech to the University of Iowa Turning Point USA chapter about  memes this evening. During our presentation we played a harmless meme of Kamala Harris welcoming a bus full of migrants, set to tasteful mariachi music. That is when a low-T leftist strung-out on pure soy snapped into a violent rage.

“I watched dispassionately as the lib’s last drop of testosterone evaporated in an unprovoked kick-attack on an innocent projector.

“Thankfully, no one was hurt by the domestic terrorist attack other than an innocent Panasonic Projector. The perpetrator was arrested soon after and booked for a hate-crime against memes. Our hearts go out to the brave Iowa City Police department. Fund The Police.

“Let this moment serve as a poignant metaphor for what happens to meme-makers across social media when their accounts get attacked.

“As someone who lived through January 6th, I can tell you this attack was much scarier and represents a larger existential threat to our Democracy. The 1st Amendment is under attack constantly from Left. It survived – this time. The Left Can’t Meme.”