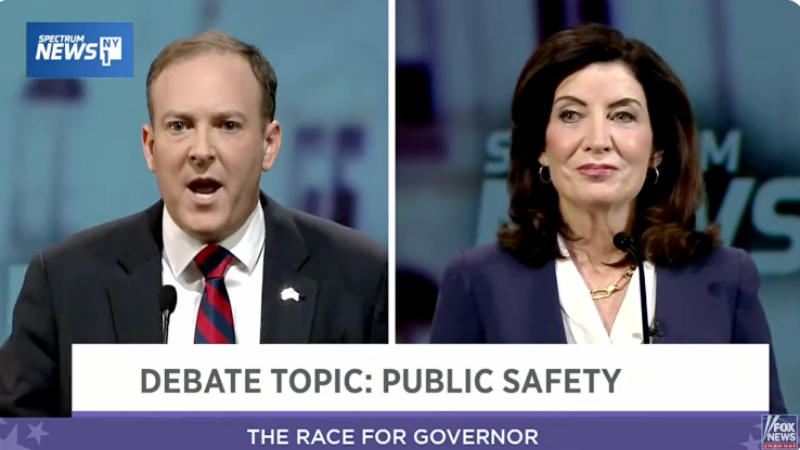 Congressman Lee Zeldin took on incumbent New York governor Kathy Hochul in a debate for the leadership of that state on Tuesday night. While Hochul was the perceived front-runner, being a Democrat in a Democrat-heavy state, Zeldin has been making headway in the recent weeks leading up to election day. The key issues were crime, the economy, immigration, and abortion, Covid, as well as the nitty-gritty details of how to run the state.

Zeldin promised to be tough on crime, to deal with immigration, to not change New York's abortion laws, and to make New York's streets safe again. “You asked me why does New York lead the entire nation population loss,” he said, “because their wallets, their safety, their freedom and the quality of their kids education are under attack. So they're hitting a breaking point. They're looking at other states like the Carolinas, Tennessee, Texas, Florida and elsewhere. And they feel like their money will go further, they'll feel safer and they'll live life freer. The state is at a crossroads. We were at a crossroads in 1994 when New York elected George Pataki. And we're at a crossroads right now. As far as what happens we tap on one party rule for four more years outsized power of self described socialist, we need balance and common sense restore to Albany.”

“New York is in crisis,” he said. “We've experienced on so many levels, attacks on our wallets, our safety, our freedom, your children's education. You're poor and less safe because I'm Kathy Hochul and extreme policies. This is your opportunity to save New York. Over the course of this next hour, you'll get to hear a clear contrast between the two of us as far as our vision for this state. If you're tired of soaring crime, DAs that let violent criminals out on the street to roam free, crushing taxes and skyrocketing costs. New Yorkers struggling to feed their families and heat their homes. The reality is for you. You deserve better.”

Crime and public safety were foremost in the minds of moderators on Tuesday, and Zeldin was asked the first question on that topic. The moderator for Spectrum News asked Zeldin if he would make policy despite findings of an expert agency that states things are essentially the same with regard to crime in the state, and Zeldin said unapologetically that yes, he would seek reforms to “make sure our streets are safe again, to make sure our subways are safe again.”

“This is our opportunity two weeks from tonight,” Zeldin said, “we can continue with the status quo where they believe that haven't passed in a pro criminal laws, or we can take control of our destiny and major law abiding New Yorkers are in charge of our streets again.”

Hochul insisted this was merely a scare tactic, and that “illegal guns” were the foremost part of her plan to deal with crime in New York state and New York City. She blamed Zeldin for not voting to ban guns in Congress.

“Kathy Hochul believes that the only crimes that are being committed are these crimes with guns. And you've got people who are afraid of being pushed in front of oncoming subway cars. They're being stabbed and beaten to death on the street with hammers. Go talk to the Asian American community how it's impacted with the loss of lives,” Zeldin said.

He offered concern for the Jewish community, as well, which has faced antisemitism across the City, and said that for sure he would pull DA Alvin Bragg, who “refuses to enforce the law.” Bragg notoriously prosecuted Jose Alba, who defended himself and his shop against a criminal who robbed and stabbed him, instead of the man who committed the crime.

Hochul pivoted back to gun legislation, mental health care, and surveillance in the subway system.

“Crime in the subway is up by over 57 percent this year,” the moderator said. “There have been eight homicides in the subway so far in 2022. While in prior years, going all the way back to 2008, there were never more than three murders in any given year in the subways. And as you mentioned, a few days ago you and Mayor Eric Adams announced a plan for an expanded police presence in the subways, along with more security cameras 50 new treatment beds for the mentally ill but given them the dimensions of the problem. What is your message to New Yorkers who are frightened for their safety and believe the latest initiative is too little too late?”

“No, I understand the fear I walk the streets of New York City every day,” Hochul said. “I'm taking the subways. This fear is real. There's facts that talk about statistics make a different case, but I'm also dealing with real human beings who are anxious about their kids getting on a subway or going to work. I understand that. But that was not my first time teaming up with Mayor Adams. We were together literally January 6, Not that January 6, But January 6 The following year, when Eric Adams was brand new As Governor, as mayor, I said let's go to the subway together. Let's work together. You never heard that before: a governor and a mayor working in concert to support law enforcement.”

“We're still waiting for Kathy Hochul to talk about actually locking up criminals, and people at home waiting for action to make sure that the handcuffs are going on criminals instead of law abiding New Yorkers, so that people can go walk the streets of Manhattan instead of having to call an Uber just to go to blocks because they're afraid,” Zeldin said.

Zeldin recounted that Jews have removed their yarmulkes for fear of being targeted, women afraid of being pushed into subway tracks, and that criminals need to be arrested, prosecuted, and not released on cashless bail.

Later in the debate Hochul again brought up her plans to prevent gun sales, one of which is to have credit card companies report on gun buys. Zeldin brought up the drive-by shooting that took place right outside his own home, saying that it's likely those criminals didn't buy their weapons with American Express.

Zeldin also slammed Hochul for believing that all crimes are committed with guns.

New Yorkers across the state are having trouble paying for housing, energy, gas and food. On housing, Zeldin said developers aren't able to cut through the red tape and bureaucracy in the state in order to bring affordable housing into the state. He noted the population loss the state is experiencing, and that housing, the economy, and crime are the reasons why people are leaving.

Hochul would not answer the question on if she would approve of any limits on abortion at any point in pregnancy. When asked outright are “there any restrictions around abortion that you would approve of?”

Hochul said: “What we have in New York State is simply a codification of Roe v. Wade. So what has been out there since the Supreme Court before the Supreme Court undid 50 years of progress for women, so women like myself and my daughter would have a right, my granddaughter does not have the same right, that I had to make a determination in concert with myself or my doctor after the six month. So we have the same restrictions, and anyone who says otherwise is just incorrect. But what is so appalling is the sort of general campaign conversion that we're trying to hear from Lee Zeldin who will say, ‘oh no I really won't change any really nothing changed.'”

Zeldin said explicitly that he will not make any changes to abortion law in New York, saying of the laws “I'm not going to change that.” But that he did not agree with Hochul's plan to make New York a “sanctuary state” for abortion, meaning that New Yorkers taxpayers dollars would go to pay for abortions for those who are not residents of New York.

While Zeldin opposes abortion, he is clear that he would listen to New Yorkers on abortion.

Each candidate was able to ask each other questions. Zeldin brought up the corruption in Albany, which is notorious, specifically as regards “pay-to-play” schemes and “no-bid” contracts for Covid services. Hochul denied it.

When asked his view of Donald Trump, Zeldin cited those policies of Trump that he thought were the correct ones. “I worked closely with him,” he said, going on to tout the work done to fight the MS-13 gang on Long Island, the securing of the $2 billion electron ion collider for Brookhaven National Lab, jobs in construction and research, as well as foreign policy with the Abraham Accords, securing the US-Mexico border, strengthening the US relationship with Israel, and securing PPP during the pandemic when necessary.

On immigration, Hochul said she was “working with the President, working with Mayor Adams, to help these people.”

Zeldin cited the real issue, which is that Hochul has not been transparent, has not called Biden out on his disastrous border policies, but instead is spending New York's money recklessly. He slammed Hochul's immigration policies as essentially neglectful.

As for Covid vaccine mandates for New York's school children, Zeldin said he would never mandate Covid vaccines, that the vaccine itself changed the definition of “vaccine” since it doesn't actually prevent contracting or transmitting the illness. Hochul said she wouldn't mandate them at this time. The CDC recently added the vaccine to the childhood immunization schedule, despite it not conferring immunity.