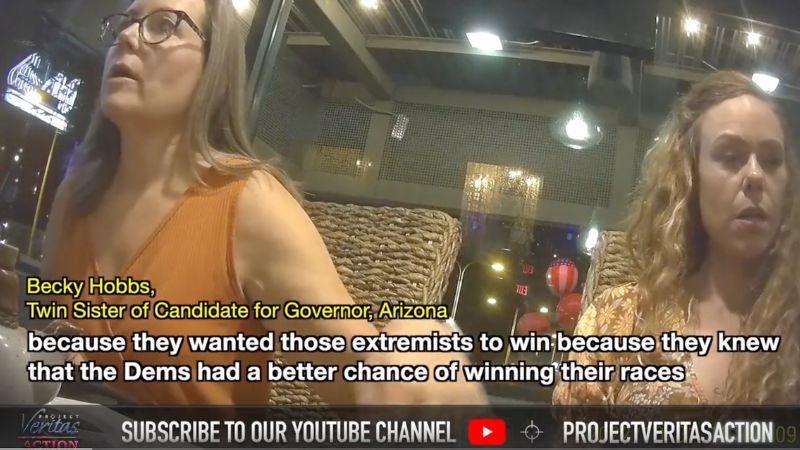 A new undercover video from Project Veritas featuring Becky Hobbs, the twin sister of Arizona gubernatorial candidate Katie Hobbs, has revealed that the Democrat party gave money to what they classified as “extreme” Republican campaigns in an effort to win the vote.

“So, all across the country Democrat candidates, not candidates themselves, but the party, was putting money in primaries, into the races of extreme Trump-endorsed candidates, as opposed to the moderate Republicans that were running, because they wanted those extremists to win because they knew that the Dems had a better chance of winning their races against the extremist candidates than they did against the moderate Republicans,” Becky Hobbs was seen saying in the undercover footage.

She added that “everyone wanted Kari Lake to be the nominee,” and that it was a “sigh of relief” when Lake ended up winning the Republican primary.

When the Project Veritas journalist questioned “why,” Becky Hobbs said, “because Katie — it’s [Kari Lake] a better opponent for her.”

Project Veritas founder James O’Keefe questioned the narrative that Trump-endorsed candidates are a “threat,” asking, “so which is it? Are Trump-backed candidates a genuine threat? Or is it all engineered by the Democratic Party to alter public perception for their benefit?”