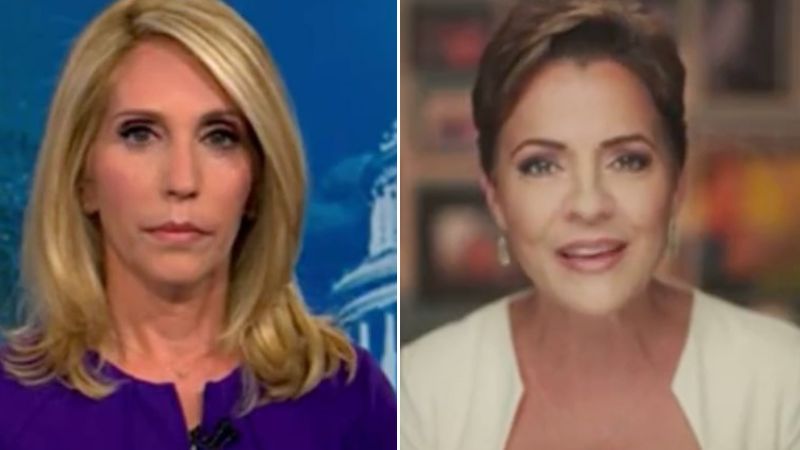 Arizona Republican gubernatorial candidate Kari Lake appeared on CNN's State of the Union on Sunday and told guest host Dana Bash that the momentum is in her favor and she is going to beat Democrat Katie Hobbs come November. Hobbs has notoriously refused to debate Lake.

“I'm gonna win the election and I will accept that result because the people of Arizona will never support and vote for a coward like Katie Hobbs,” Lake said, noting Hobbs refusal to debate. “She's single handedly destroying a 20 year tradition of gubernatorial debates because of her cowardice.”

Lake has repeatedly said that she would debate Hobbs on whatever terms would satisfy Hobbs, but Hobbs has refused again and again to face her opponent.

Lake said that Hobbs has “no momentum behind her. The polls are in our favor and we're gonna win this election. I'm 100% confident of that. We have the ideas, common sense ideas that people want.”

According to local KTAR News, Lake has taken a lead over Hobbs in a new Phoenix-based poll which shows her at 47 percent over Hobbs' 44 percent.

Bash asked Lake if she would accept the results of the election after questioning her earlier about the election integrity of 2020, saying there was “no evidence” of 2020 voter fraud “presented in a court of law or anywhere else.”

“We had 740,000 ballots with no chain of custody,” Lake shot back before noting “The real issue, Dana, is that the people don't trust our elections.” Lake brought this mistrust back to 2000, and tracked up through 2016.

“In 2016, Kamala Harris, Amy Klobuchar, and Hillary Clinton. Everybody on the Democrat side said the election had problems,” Lake said, adding “In 2018 Stacey Abrams never conceded. She still hasn't. I don't hear CNN calling her an election denier.”

The interview also touched on the pressing topics at the top of Arizona voters' concerns, including inflation and Biden's border crisis, despite Basch wanting to focus on the 2020 presidential election of two years ago.

“Well, the vast majority of the people coming across don't really meet the criteria for asylum. There's a lot of fraudulent asylum claims that are being made,” Lake said.

Bash had said that, according to the Department of Homeland Security, “less than 1 percent of migrants encountered at the border have a criminal record.”

Lake, a former journalist, immediately said, “I'm gonna have to disagree with you on that figure you just put out. We have a million ‘gotaways.'” These are illegal alients how cross the border and are never even recorded by DHS.

Lake also touched on the record high inflation plaguing the country and promised to fight for those hit hardest, especially retirees who have seen retirement funds “shrivel” since Biden took office.