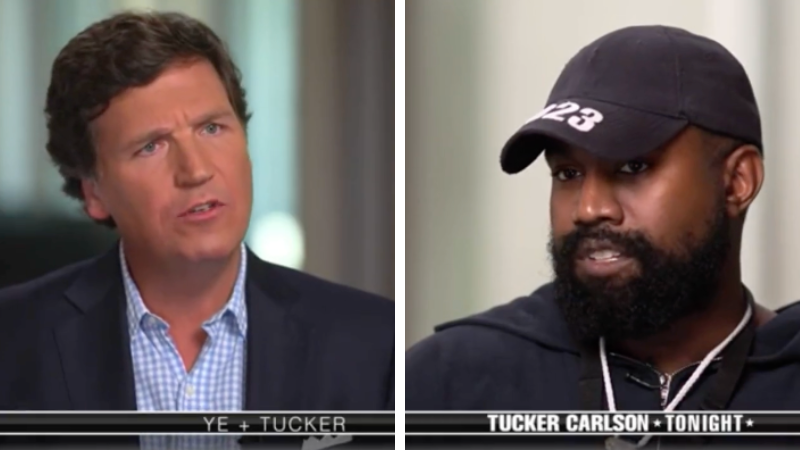 West, who recently went through a very public break-up with Kim Kardashian, has been seen in varying lights through the media lens, all of them critical. And in the interview, he spoke about his mother and father’s split, his father’s history as a Black Panther, and the reason he wore the shirt.

“The answer to why I wrote ‘white lives matter’ on the shirt is because they do. It’s the obvious thing,” West said.

The candid interview took place shortly after West landed back in the US after the French fashion trip, and West spoke honestly about his faith, his belief in God, saying “We have God on our side,” and “Even if you don’t believe in God, God believes in you.”

Fashionists and mainstream media outlets called him crazy, but Carlson sat down with him and discovered that West is astoundingly and unapologetically pro-life, standing up for the millions of black baies that are killed in-utero each year in the US.

Carlson asked about the White Lives Matter t-shirt, for which West took so much heat, and he said that he wore it because it was based on how he felt. Political and cultural commentator attended fashion week along with West, and wore the shirt along side him.

“I really felt like I think I started to really feel this need to express myself. On another level. When Trump was running for office and I liked him. Every single person in Hollywood, from my ex-wife to my mother-in-law to my manager at that time to you know, my so-called friends slash handlers around me, told me if I said that I like Trump, that my career will be over, that my life would be over.

West spoke openly about the split with Kardashian, and how important it was for him to buy a home next to Kardashian’s so that he could be close to his children.

West, Carlson said, strayed from the “approved script,” and indeed West did. The controversy over the shirt, he said, began with narrative-makers “having this black girl comment and say ‘well, I felt traumatized when I saw this t-shirt.”

“A black girl saying I felt traumatized when I saw a black man wearing something that he wasn’t allowed to wear,” West said.

“But it was a set-up,” he said a little later. He said that he was called a bully, but he believed that he, and other influencers, like his wife, like singer Lizzo, are the ones being bullied by the narrative-makers who demand that everyone speak as their told from some kind of pre-made script. This is true of Lizzo, who said, who is slammed for trying to lose weight.

“Why do you think they want to promote unhealthiness among the population?” Carlson asked.

“It’s a genocide of the black race,” he said. “They want to kill us in any way they can. Planned Parenthood was made by Margaret Sanger,” he said, who was a eugenecist, and in league with the KKK. He believes that black people in the US are obsessed with being a race, and instead they should view themselves as a people. He spoke about how his father, growing up, was mostly among white people, and that therefore he was on the outside, but that when he ended up at a black college, he was on the outside there, too, for being too white.

Of his dad, he said “Like my dad is the most brilliant person that I know. And we actually have a strained relationship, because I was taken from him because my mom was an actress. So she was a liberal. And my dad would see certain things and say, ‘you know, we should do it this way. We should do it that way.’ And the people go around my mom and pulled her away much like, you know. Kim is a Christian, but she has people who want her to go to Interview Magazine and put her ass out while she’s a 40-something-year-old multibillionaire with four black children. And this is what how fashion wants to how they want to present her.”

West said he didn’t come out as in favor of Trump as he wanted to because he was manipulated away from doing so. He found out that Kardashian had been tight with the Clintons, and that they were encouraging her to get him to use his platform to push Covid vaccines.

“I keep telling this joke as people say Trump was the first black president, I’m going to be the first Latino president. Because all the values like the conservative values just line up. Come on, Trump’s has his own buildings. We talked about he’s like, like Ralph Lauren. He made Ivanka,” West said.

He penned an Instagram post on Thursday disparaging Jared Kushner, Ivanka Trump’s husband, saying Kushner may have been holding Trump back, handling him, and that perhaps the work he did in the Middle East was based on a financial motive.

“People with power try to make other people feel like they don’t have any. My power is through God. So if someone ever says anything like ‘oh, you did a great job’, it’s ‘Praise God,'” West said.

“It’s funny atheists love the term narcissist. When you believe in yourself, they say that it’s narcissistic. You know, I love the way, I love the dynamic of how you compare, you show that it’s still humanity, even with the position that God has placed me.

“Why did Moses smite the rock? Why do you get that frustrated? And just to to be able to be just gentle, to be more gentle. You know God is alive. Look at this right here. Look at look at how quiet it is right now. It’s only God. God has an order. The devil is of chaos,” West said.

“That is true,” Carlson said.

“For older white people, they’re quick to classify a black person only by the fact that we’re black. Even Even Trump a person that’s, you know, we’ve considered to be friend of mine, when I went to the White House, I called him to that to get ASAP Rocky out of jail and one of the things he said to me is ‘Kanye, you’re my friend but when you came to the White House, my black approval rating went up 40 percent.’

“And for politicians all black people are worth is approval, is an approval rating.

“What are we asking for? How do we change our life? If all of our organizations and all of our colleges and even our title as black was made by white people? All of our org? You know, all of our jobs and Black Wall Street, Harlem after gentrification.

“There’s never been a fully black owned community where we we have all the municipalities things that Dr. Claude Anderson talks about. We need that.

“That’s like 90 percent of America is not even developed. I’m not one of the people that go up and say, ‘hey, I want to stop anybody from making money.’ The people that make money and the powers that be I am your true, Nikola Tesla. And I’m not even a scientist,” West said.

“What do you think of Elon Musk? Do you know him?” Carlson asked.

As for Trump, and his opinion of Trump, West said:

“I never actually told people that I like Trump when he was running, because I was bullied by Hollywood, because I stayed in Hollywood. And people were like ‘think about your kids.’ And I’m trying to hold on to a marriage. So I was biting my tongue.

“There’s so many fathers and mothers that go to work every day, and they’re in a situation where they’re biting their tongue, because they think it will be better yes, for their children.

“So even me, in my position, I was biting my tongue on my political opinion, because I thought it would be better for my children,” West said.