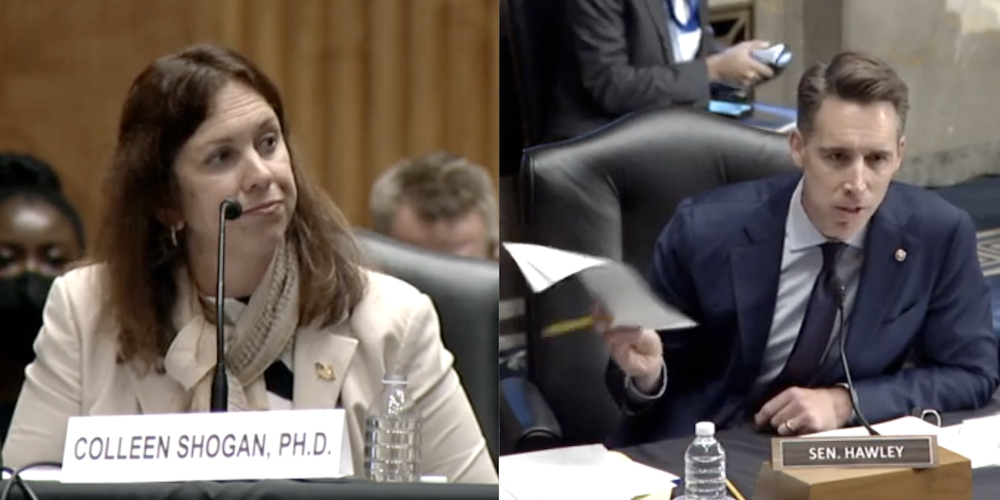 On Wednesday, the Senate held a confirmation hearing for Dr. Colleen Shogan, President Biden’s nominee to lead the National Archives.

During the hearing, Sen. Josh Hawley of Missouri grilled Shogan over a paper she had written in 2007, titled Anti-Intellectualism in the Modern Presidency: A Republican Populism, which described the tactic of anti-intellectualism and its use by Republican presidents over the years.

Hawley began by noting that in the paper, Shogan wrote that recent Republican presidents had adopted anti-intellectualism to “combat allegations of elitism.”

Shogan defined the term as “the ability to speak in very plain, common-sense terms to Americans.”

In her paper, however, the Yale graduate described it as “the attainment of knowledge through instincts, character, moral sensibilities, and emotions,” adding that one who displays such qualities “disparages the rational complexity associated with intellectual pursuits.”

Shogan alleged that Republican presidents such as Eisenhower, Reagan, and Bush all employed anti-intellectualism in their leadership styles in order to mask the fact that they were all, for the most part, well-educated members of “the elite.”

“Absolutely not,” Shogan replied, suggesting that she had been trying to highlight a “rhetorical connection” Republicans have with the American people.

In the paper, Shogan attributed the rise of Republican anti-intellectualism to “the rise of the religious-right.” Hawley brought this up, questioning whether she viewed that voting bloc as “stupid.” He also cited her as saying Reagan had “less than favorable intellectual capacities.”

Shogan denied that either claim was implying that Republican leaders and their voters were “dumb.” In the paper, she noted that anti-intellectuals “are not necessarily unintelligent or dismissive of smart people.”

Nonetheless, Hawley continued to press Shogan on whether she thought Republicans, including those who voted for Donald Trump, were anti-intellectual, however she did not budge in her insistence that the anti-intellectualism employed by Republicans presidents appealed to voters because of its simple, common-sense nature.

Shogan tried to turn the conversation from the paper to her more than fifteen years of non-partisan service, however Hawley pointed out that given the current state of American institutions and trust in them, she had to do a better job of proving that she would, in fact, be non-partisan.

Shogan defended herself, once again citing her experience at the Congressional Research Service, the Library of Congress, and the White House Historical Association.

Hawley concluded by entering Shogan’s paper into the official record, suggesting people will be “deeply disappointed” when they read it.