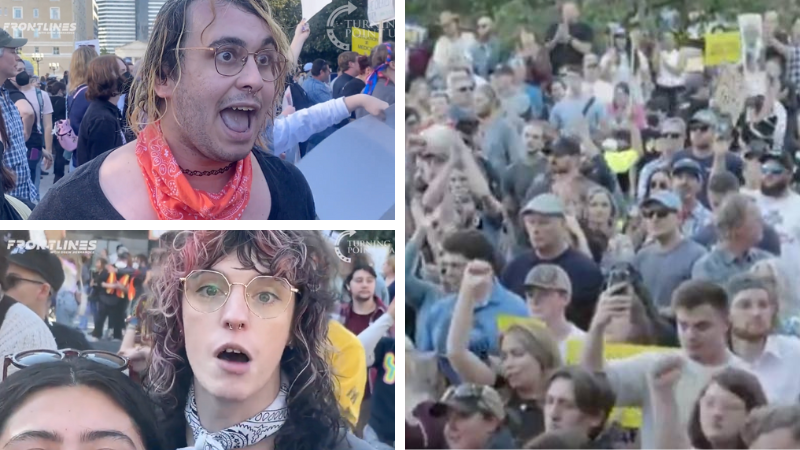 Unhinged far-left protesters were in attendance at The Rally to End Child Mutilation in Nashville. Organized by The Daily Wire’s Matt Walsh and featuring Tulsi Gabbard, Landon Starbuck, Colin Wright, and Chloe Cole, among others, the event was intended to call attention to the increasing problem of medicalized gender transitions for children.

Police confirmed to The Daily Wire that there were about 3,000 people in attendance, and the vast majority of those were in support of ending sex changes for children.

As Cole tried to speak about her personal experience going through gender transition and coming out the other side, activists screamed “F*ck you fascist.” TPUSA contributor Drew Hernandez documented the protests.

Cole continued to speak despite the protests, curses, and name-calling.

One crazed protestor, who appears to be a biological male identifying as transgender, used a megaphone to scream “f*ck you, you f*cking white cracker.”

“F*ck you fascists” appears to have been the preferred chant by protesters at the event, who likely advocate for children to be given drugs that stunt their natural growth in the name of gender ideology. Children who are given these drugs, then go on to take cross-sex hormones, and never achieve orgasm in their lives.

Protesters wore and waved trans flags as they screamed and refused to allow the speakers to express their views.

A bearded biological male stated said that “I’m on hormones, and I know what it takes.” The protester claimed, falsely, that hormone blockers for kids “are completely, completely reversible.”

Tulsi Gabbard explained that “Those in power are denying the existence of women, they are seeking to erase us as an entire category of people.” Gabbard cited the push for gender transition for kids when she left the Democratic Party.

Landon Starbuck, who has exposed the problem of drag time for kids in Tennessee, spoke about this being a peaceful movement of safeguarding children.

Another screaming protester said Walsh is “a stocastic terrorist,” while confronting a man who said “you don’t push things on children.”

Walsh said he was glad to see the protesters because it highlights the contrast between those who actually care about children and those who just make noise. He said that the opposition is angry because they “are losing.”

“They will continue to lose so long as we continue to fight,” he said, imploring people to “speak the truth.”