BREAKING: Florida Surgeon General slams Twitter after he was censored for vaccine warnings 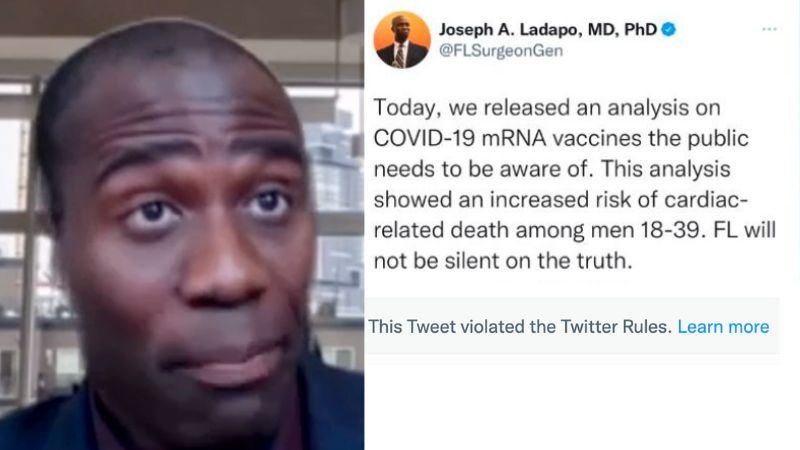 On Monday’s episode of War Room, host Steve Bannon spoke with Florida Surgeon General Joseph Ladapo about Twitter censoring a message he wrote on Sunday advising men between the ages of 18-39 not to get the Covid vaccine after a thorough analysis by the Florida Department of Health.

“It is really almost criminal,” Ladapo told Bannon, “in terms of, how much disregard that they have for human rights. And I’m not talking just about Twitter, but this whole body that thinks it’s okay to crush the voices of others, because you don’t like their message.”

On Friday, Ladapo released the state’s analysis of COVID-19 mRNA vaccines, revealing an 84 percent “increased risk of cardiac-related death among men 18-39.” Florida “will not be silent on the truth,” he said. The guidance “recommends against the COVID-19 mRNA vaccines for males ages 18-39 years old.”

“It’s a message for people, for humanity so that people can make informed decisions,” the Harvard-educated doctor told Bannon.

“You want to do more research. Terrific. You think you’ve already seen enough evidence and you think our methods are persuasive to you,” Ladapo added, “Terrific.”

“Humans, people get to make those choices. But these this body of tech and other other forces that come in and silence people, they don’t think human beings have the right to to have free access to information that they don’t want them to have access to. So it’s I mean, it’s you know, Twitter, yes, but it’s a huge deal,” he added.

The Florida Department of Health released the findings of a self-controlled case series which they used to evaluate the safety of the Covid vaccines, which “studied mortality risk following mRNA COVID-19 vaccination.”

It found that “there is an 84% increase in the relative incidence of cardiac-related death among males 18-39 years old within 28 days following mRNA vaccination.”

The findings also showed that “Males over the age of 60 had a 10% increased risk of cardiac-related death within 28 days of mRNA vaccination,” and that “Non-mRNA vaccines were not found to have these increased risks among any population.