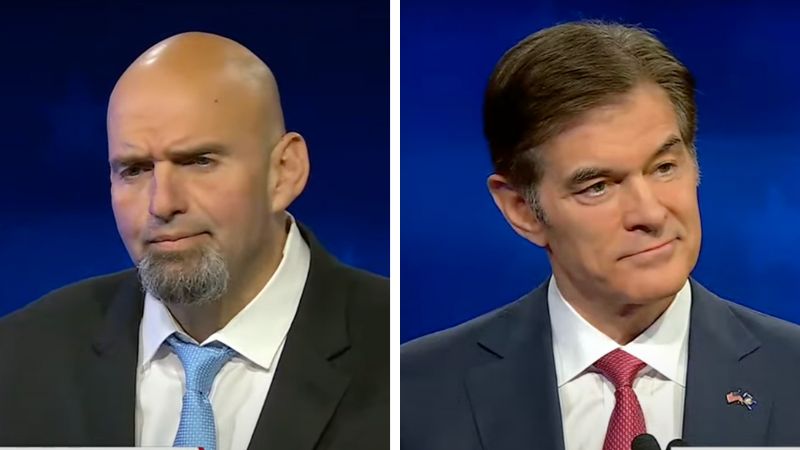 On Tuesday evening, Pennsylvania Senate Candidates Mehmet Oz (R) and John Fetterman (D) met in their only debate before the midterm election.

Moderators noted at the beginning of the debate a screen behind them, showing closed captioning for Fetterman, who suffered a stroke earlier this year.

“If we've got 4 percent waste and fraud, we ought to be taking — to be able to take care of that,” he said.

“John Fetterman’s however response continually is to raise taxes. He raised taxes as mayor. He tried to raise taxes as lieutenant governor 46 percent. That's a big tax rate. He supported Joe Biden's recent tax rate increase, and he's done that without paying his own taxes 67 times. I'll say that again. He hasn't paid his own taxes 67 times, but he's raising mine and yours,” Oz added.

Fetterman said that to fight inflation, “we must push back against corporate greed” as well as “price gouging,” claiming this is an issue that Dr. Oz “can’t possibly understand.”

Responding to Fetterman’s comments, Oz said that “when John Fetterman brings up houses, the irony is he didn’t pay for his own house. He got it for $1 from his sister.”

In regards to lowering gas prices, Oz recalled hearing people say that they can’t take vacations because of the price of gas to get there. He noted that Fetterman “has gone after the energy industry” in the state.

Following Oz’s comments on Fetterman, Fetterman lashed back, being interrupted by moderators who said that the debate must continue forward.

Moving on to abortion, moderators noted that Oz has taken a pro-life stance while stating that exemptions should be made for rape, incest, and to protect the life of the mother.

“There should not be involvement from the federal government in how states decide their abortion decisions,” said Oz.

Oz noted that Fetterman said abortions should be allowed “at 38 weeks on the delivery table,” he said, adding that Fetterman’s stance would force taxpayers to fund a procedure that goes against their personal beliefs.

In regards to questions on whether or he would release his full medical records, Fetterman said “my doctor believes that I’m good to serve, and that’s what I believe is appropriate,” and did not say outright that he would release these records.

Oz was then questioned about a change in position regarding fracking, noting a column in 2014 where he called for a pause in fracking pending health study results, and then social media posts supporting the industry.

Oz said that his position has been “very consistent,” noting that he supports the industry as a lifeline for the state, as well as a way to “help our allies,” citing the Russian invasion of Ukraine.

Oz continued on to attack Fetterman, saying that “he supports Biden’s desire to ban fracking on public lands,” saying that that is an “extreme position on energy.”

In rebuttal, Fetterman said he “absolutely supports fracking,” and that he lives across the street from a steel mill, “and they were going to frack to create their own energy.”

Fetterman noted his time as mayor back in 2005, stating that he ran his campaign on fighting gun violence, adding that he’s “the only person on this stage right” that can say they “successfully pushed back against gun violence.”

In response, Oz said that the Fraternal Order of Police from Braddock, the town where Fetterman was mayor, endorsed himself over Fetterman, adding that crime “got worse when he was there.”

In regard to illegal immigration and Republican states sending illegal immigrants to Democrat cities, Oz said that “the completely porous open nature of our border, which John Fetterman supports, has created a humanitarian crisis with cartels profiting with human trafficking.”

“The Statue of Liberty doesn't say to put the huddled masses on a bus,” Fetterman said in response to his immigration policies.

While speaking about supporting Donald Trump if he were to run for the 2024 presidential election, Oz noted the importance of the American legal system, saying on the subject, “John Fetterman took a shotgun, chased an unarmed African American man,” with the victim stating that Fetterman pointed the gun at his chest.

In response to the point, Fetterman said that he had the “opportunity to defend our community as the chief law enforcement officer there.”

Regarding expanding the supreme court, Fetterman said that he would support the idea, with Oz agreeing with the point, but noting that Fetterman wants to remove the filibuster in Congress, which would allow such a point to pass through the chambers.

In closing, Fetterman said his campaign is about “fighting for everyone that ever got knocked down,” and that it's about “serving Pennsylvania” rather than “using Pennsylvania.”

Oz said that he's heard the concerns of Pennsylvanians across the state, and that “this is all very addressable.”

“We take big problems, we focus on them, and we fix them. And we do that by uniting, by coming together, not by dividing. And by doing that, we can get ahead.”