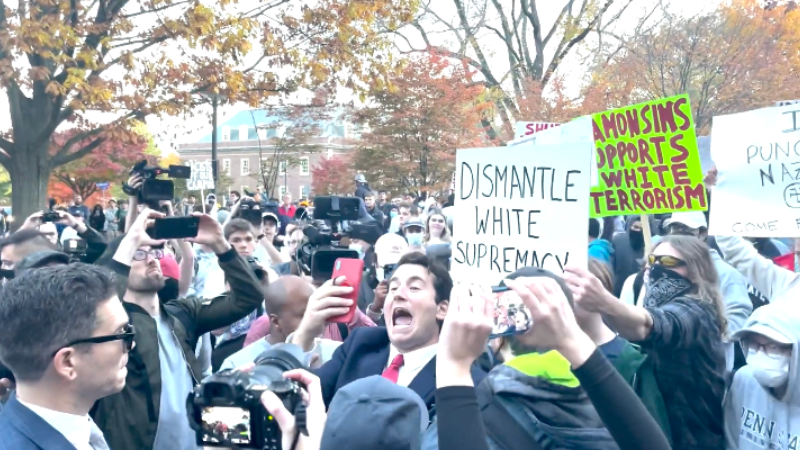 Police were out in force after a riot erupted on Penn State's Happy Valley Campus on Monday in response to appearances by right-wing comedian Alex Stein and provocateur and Proud Boys founder Gavin McInnes. State police could be seen protecting the building where the men were set to speak.

Hundreds of students assembled to protest the two men and the event was summarily canceled. The University issued a statement on the cancellation, saying that “Due to the threat of escalating violence associated with tonight’s event, Penn State University Police determined that it was necessary to cancel the speaking event in the interest of campus safety. Demonstrations regrettably turned violent.”

Alex Stein, who did not get the chance to speak, mingled among the protestors while being called all manner of vile names. He appeared to be enjoying himself and laughed when a young woman spit on him.

Police were called in to keep the peace, facing curses and yelling from the crowd.

“Who do you serve? Who do you protect?” The students shouted at the police.

“The University has been clear that the views and speech of the two speakers at tonight’s student-organization-hosted event are abhorrent and do not align with the values of Penn State. We have encouraged peaceful protest, and, while protest is an acceptable means of expression, it becomes unacceptable when it obstructs the basic exchange of ideas. Such obstruction is a form of censorship, no matter who initiates it or for what reasons. The University expects that people engaging in expressive activity will demonstrate civility, concern for the safety of persons and property, respect for University activities and for those who may disagree with their message, and will comply with University rules.

“The climate in our nation has been polarized for quite some time. On campuses across the country, violence is proliferating and individuals are being intimidated and even harmed. This must stop.”

Independent journalist Ford Fischer was on hand to document the event and shared a live broadcast.

College campuses have become amazingly censorious, and over and over, conservative and controversial speakers are prohibited by students from speaking. Tomi Lahren was shut down at the University of New Mexico. Jeffrey Younger was prevented from speaking at the University of North Texas. Dartmouth shut down a speaking engagement with Andy Ngo. And these are only a sampling of the many canceled speakers on college campuses where students are so concerned for their own safety that they cannot bear to allow those with whom they disagree to speak.