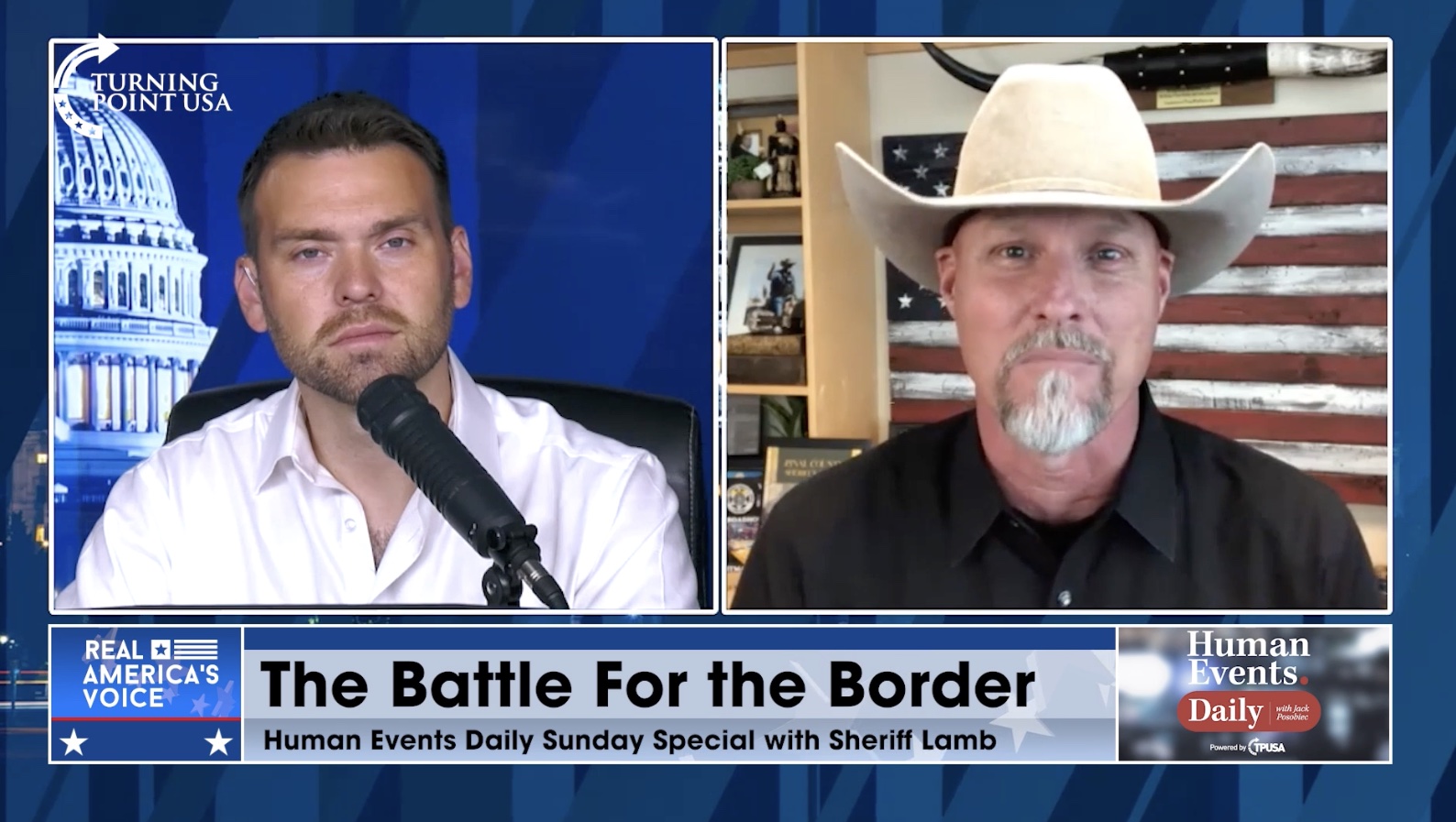 Sheriff Mark Lamb of Pinal County, Arizona revealed that child slavery is happening in the US. Children are being trafficked by crime cartels not only outside the borders of the US, but are then brought into America by human traffickers and enslaved by them. These are the same cartels that traffic in drugs, Lamb told Jack Posobiec on Human Events Daily, but because drugs can only be sold once, and a woman or child can be sold repeatedly, the business of human trafficking is booming.

“I don’t think that there’s ever been—slavery has ever been—more prolific than what it is now,” Lamb told Posobiec.

This is not, Posobiec pointed out, agricultural slavery, it’s “a new kind of slavery that involves women, in some cases, underage girls, underage boys. It’s sex slavery. It’s labor servitude, of people that are being trafficked across the border by these transnational criminal cartels that are then putting people essentially into bondage.” The numbers of people enslaved in these methods and trafficked by cartels, Posobiec said, “may actually be higher than anything that we’ve ever seen before in our country.”

The DEA reported in 2021 that “human sex trafficking” is a huge problem in the US. “Human trafficking, something we often see inextricably linked with drug trafficking, is so much more prevalent in this area than most people think,” the DEA said, and it’s only been getting worse as cartels have been empowered by the lax border policies.

“Children are being put into slavery,” Lamb said. “We’ve got the men that are being extorted and forced to pay off. Even though they might pay a small a sum.”

If the cartel charges $6,000 for an illegal crossing, Lamb said, they will ask for $4,000 up front and give the men the chance to work off the remaining $2,000. “And then these men are forced to work that off but they’ve never actually get out from underneath it,” which is similar to indentured servitude.” So when I talked about slavery, that’s the reality of what we’re seeing every month. And as Americans, we’re allowing this to happen on our watch.”

“Transnational drug traffickers and criminal organizations often look to increase profits and market control through diversification,” the DEA said. “This means using trafficking routes for drugs, labor, sex, and violence. Transporting people (usually women and children) for sex is just another egregious source of profits for these violent criminals. For traffickers, it doesn’t matter which product is being sold—both drugs and sex are lucrative industries—as long as money is made. Drug cartels often use trafficked women and children to smuggle drugs across the border, doubling up on the money they can make from them. Violent criminals like this see no difference between abusing a woman’s body by forcing her to swallow bags of drugs or by forcing her to have sex with hundreds of men.”

“I’m going to tell you a story of a woman we caught a while back,” Lamb said. “She had a baggie full of pills. And so we said ‘hey, what are these pills’ thinking they might be fentanyl or something and so she said, ‘well, when I was going across the border, I knew that I was going to be raped multiple times. These are morning after pills.’ Where in the world where did we lose our moral compass so bad?” Lamb asked. “And under the name of politics we’ll allow this to happen. We’ll put politics in front of people and that’s truly what’s happening every day. And the longer we allow this, the more people that are being enslaved every day. Women children and men are being enslaved in this country. And it is not the American way and we must put a stop to it.”

Lamb described what have become knownas “rape trees” where the underclothes of women and girls will be hung out on the branches after they are raped by coyotes and traffickers. These are all along the border, Lamb said.

Children are often trafficked to men to give them the look of being a family, which gives them greater access to cross the border and remain in the US under the Biden administration’s policies. While it looks like the compassionate thing to do, to help families, it really imperils children who are then used, bought and sold.

The border and the issues surrounding illegal immigration have been heavily politicized, but these concerns about not only the issues with the illegal influx of masses of people into the US, but the moral concerns, and what happens to those people who are sold a false promise on their way north, are not “red and blue” issues, but “red, white and blue” issues. Lamb and Posobiec were both featured in the new Border Battle docuseries from TPUSA, which brings light to these concerns.

Lamb concurred, and the two men used Philadelphia as an example, where fentayl deaths have been extreme and the drug problems are visible in the streets. Lamb has heard people in the north express their concern for the border towns, but Lamb tells them “this isn’t our problem. This problem is coming your way.”

“Matter of fact the product, which is human beings and the drugs,” Lamb said, “is not designed to stay in Arizona or Texas. It’s designed to go throughout America. And the disconnect, which has really been created by the politicians and the mainstream media’s gaslighting of the American people, that disconnect is right there because you they see the effects of fentanyl, but they’re not told to where it’s coming from which is right across our southern border into America something that we could easily stop if we were committed to it.”

“It’s a 50-state issue,” Posobiec said, “because of the drugs and because of the human trafficking that’s pouring in, and yet because there are so many people that are benefiting, they’re actually benefiting from this flow, that are getting a cut of it. We’re told to completely look the other way. We’re told to focus on conflicts that are going on in the world 1000s of miles away that involve people that have been fighting for for 1000s of years. We’re supposed they want us to focus on that they don’t want us to focus on what’s actually happening in our own communities.”

The cartels are uncontrollable, Lamb said. The Mexican government and police are essentially at the mercy of the cartels, and those cartels operate across the border and reach their long and violent arms into the US. There are areas in Arizona, Lamb said, where the Bureau of Land Management have put up signs saying that cartels operate in the area, and people should steer clear, meaning that there are some areas in the US that American police and the federal government have given over to the cartels, and through lack of enforcement, allow them to operate there. The cartels get richer and richer, he said, every day that these lax border policies are in place.

While the Biden administration asks Americans to look at the faces of the illegal immigrants and show compasion, the cartels have weaponized that compassion, and use it against America. The more the US leans into feeling like they are “helping” by letting people in, the more those people are exploited by the violent, merciless cartels.

“For the most part,” Lamb said, the cartels “focus on trafficking humans and drugs into America. Now, some of them are so powerful and so wealthy, and every day that this administration continues with their open border policies. These groups become stronger and stronger because of the amount of cash that is being brought right to the doorsteps with these 300,000 plus people trying to come to America every month. And so they become more and more powerful. They’re heavily armed. Not only do they fight with the government, they fight with each other for power because so much money is on the line. I think I heard that they’re making about $200 million a week. So there’s an exorbitant amount of money that’s being chained exchanged hands, and when that happens, that comes with violence that comes with power struggles, and those power struggles not just happened within like I said, the cartels but it happens with the government as well.”

“What you’re telling us is that the government has no control of them,” Posobiec said. “They’re basically their own government.”

“Our government can’t stop the cartels. They don’t stop the cartels. If they did, we wouldn’t have a human trafficking and slavery problem like we’ve never seen— and this is a hard topic for Americans because it is it’s it touches a nerve. But I don’t think that there’s ever been slavery has ever been more prolific than what it is now. And not to mention, the leading cause of death in America is fentanyl. And our government hasn’t stopped them. So clearly. They have they have probably more power than we do down there. And they have certainly not only extended their their domain and their control over provinces in Mexico. They’re a day by day extending that here in America as well.”

“You’re not talking about their side of the border at this point,” Posobiec asked, “you’re saying that even here in our own country, what we would consider to be American territory, which which we claim is American territory. There’s whole routes, rat lines that are actually under control of these cartels, is that what you’re saying?”

“That’s what I’m saying,” Lamb said. “And there are signs in the desert areas saying that base that our government or Bureau of Land Management has put up saying, warning or traveling by travel, proceed with caution smugglers may be found in this area. So we’ve just put up signs to tell the American people ‘you probably shouldn’t come in here anymore.’ That tells you right there that we don’t know those routes anymore.'” These cartels are fighting each other, as well, building bunkers on the US side of the border.

When asked what could be done to shut down the cartels, Lamb said that policies that close the border are necessary, and that the cartels need to be delcared terrorists.

“Once you to declare them terrorists that gives you the ability to really use your special forces. You don’t even have to go in and create an exact war on northern Mexico. You can send in your special forces in your your high gear elite military units, which those are deteriorating because of our woke military now, but you send them in and you go in and you you do what they do, and you stop these cartels,” Lamb said.

“That’s the first step. And go back to the Trump era policy. Those work. Let’s get back to those policies. And then we can start to work on fixing the definitely broken immigration piece of this as well.”