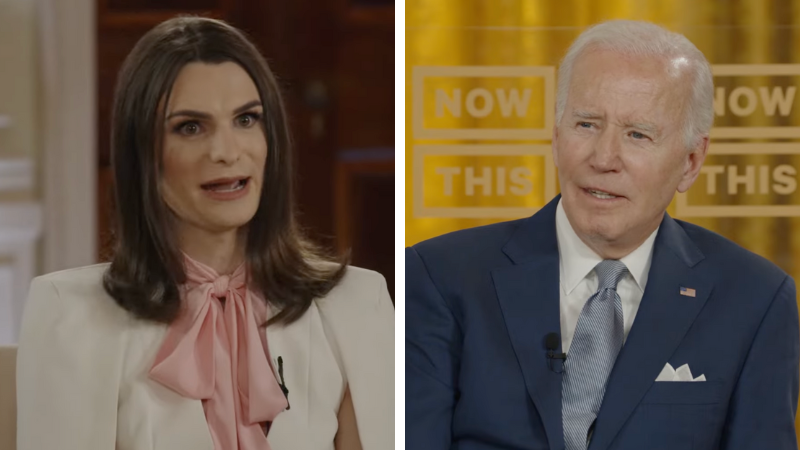 Progressive media platform Now This staged a presidential forum with Joe Biden in the White House, where trans TikTok sensation Dylan Mulvaney got the chance to ask Biden about his feelings on medical gender transition for children and teens. Mulvaney refers to vaginas as “barbie pouches,” and claimed to be a “bimbo.“

In his answers to Mulvaney, who got a boost from both Tampax and Ulta Beauty, Biden revealed that he is on board with child sex changes, and doesn't think anyone should stand in the way of medical gender transition for minors if that's what they and their parents wish.

Host Alejandra Alba introduced Mulvaney for the “trans rights” portion of the interview, praising Mulvaney for Mulvaney's very public gender transition. That transition has made Mulvaney a sensation, and is directly responsible for landing Mulvaney on this panel of influencers who had the chance to bend the president's ear on their pet, progressive causes.

Mulvaney's Days of Girlhood series saw Mulvaney transform from a flamboyant, gay actor staging interviews with animals on TikTok, to an influencer with some 8.3 million followers and an estrogen prescription.

“Mr. Mr. President,” Mulvaney began, merging the interview with the Days of Girlhood series where Mulvaney announces how many consecutive days Mulvaney has been sharing the public gender transition, “this is my 221st day of publicly transitioning.”

“God love you,” the President said.

“I am extremely privileged to live in a state that allows me access to the resources I need,” Mulvaney continued. Mulvaney lives in California, where Governor Gavin Newsom is a proponent of sex changes. “And that decision is just between me and my doctors. But many states have lawmakers that feel like they can involve themselves in this very personal process.”

States like Florida, Tennessee, Texas, Arkansas, and others have put bills in place that would prevent state funds from going to pay for sex changes, or to make illegal sex changes for children. Mulvaney believes this is wrong, and so does the President.

“Do you think states should have a right to ban gender affirming health care?” Mulvaney asked.

“I don't think any state or anybody should have the right to do that,” Biden said.

“As a moral question, as legal question, I just think it's wrong. You know, I think I was saying before we started, my son, my son used to be the attorney general for the state of Delaware. He passed the most, the broadest piece of legislation that he as Attorney General was able to convince the legislature and the governor to sign, that dealt with all gender affirming capability,” Biden said. He was referring to the 2013 bill SB97 in Delaware, which adds gender identity and gender expression to that which is protected in the state under anti-discrimination laws.

“I mean, there's a lot of, you know, you sometimes,” Biden said, “they try to block you from being able to access certain medicines, being able to access certain procedures and so on. None of that should be available. I mean, you know, no, no state should be able to do that in my view. So I feel very, very strongly that you should have every single solitary right, including, including use of your gender identity bathrooms, but public.”

“Thank you,” Mulvaney said before continuing with questions.

“And it feels like Republicans have turned trans and non-binary people into this thing to blame society's downfall on in some ways?” Mulvaney said. “And this narrative is not only dangerous for mental health, but also our physical safety, and particularly trans women of color are being murdered at an alarming rate.”

“More than any other group of people,” Biden interjected. The ACLU claims that the best way to prevent the murder of black trans lives is to decriminalize sex work. This is because the vast majority of those trans persons of color who are killed are involved in sex work. This is not the first time Biden has exhibited a false understanding of the non-epidemic.

“How can Democratic leaders be more effective in advocating for us trans people and our families, and our lives and our opportunities?” Mulvaney asked.

“Not being facetious when I say this but you see it with people like you” Biden said. “I mean, I genuinely mean it.”

“People fear what they don't know,” Biden said. “They fear what they don't know. And when people realize, individuals realize, ‘oh, this is what they're telling me to be frightened of. This is the problem? This is?' I mean, people change their minds. People are just, don't know enough to know. And it's not because of intellectual capability. It's just a lack of exposure. And, I think that it's really important that we continue to speak out about the basic fundamental rights of all human beings and the idea, the idea that what's going on, you know, in some states, I won't get into the politics of it, but in some states, it's just it's outrageous. And I think it's immoral. The trans part's not immoral, but what they're trying to do to trans persons is immoral.”

“And do you have any messages to families of trans folks that are seeking, you know, options for their children, but are struggling to find resources? Do you have a message to those parents?” Mulvaney asked.

“Yeah, I do. This is one of your blood bone of your bone,” Biden said. “And it is, again, speaking to my son when he was, he spent a year in Iraq and he was a decorated soldier. He volunteered to go and had to give up the Attorney General job and came back to it. And he started a foundation.”

Biden previously told parents to “affirm your kids” when he spoke out on Trans Day of Visibility in April 2022. “To parents of transgender children: affirm your child's identity. One of the most powerful things you can do to keep them safe and healthy,” he said at the time.

“I'm not allowed to talk about that,” Biden told Mulvaney about the foundation, “because I can't raise money for it any longer, but it was for abused children. And one of the things he did is raised millions of dollars, for this organization, to basically educate parents as to what they should not be afraid of. And to educate the community as to what is, what is, just pure hyperbole. And so I just think it's a matter of leaders speaking out, and saying, I told you, I mentioned a young woman, used to be in his staff, used to be in my staff, who is now a state senator, and she's trans and she's, you know, a state senator in the state of Delaware.”

He was speaking about Sarah McBride, who, until Biden appointed Rachel Levine as the Assistant Secretary of Health and Human Services, was the highest-ranking trans official in the country. Without transition, McBride, like Mulvaney, would have been considered a white, biological male. This has traditionally been the demographic that holds the most leadership positions in the US.

The Biden White House has been notoriously pro-influencer, giving social media influencers access to interviews throughout the presidency. These include forums in which the White House delivered messaging to influencers on Covid, vaccines, and the war in Ukraine.