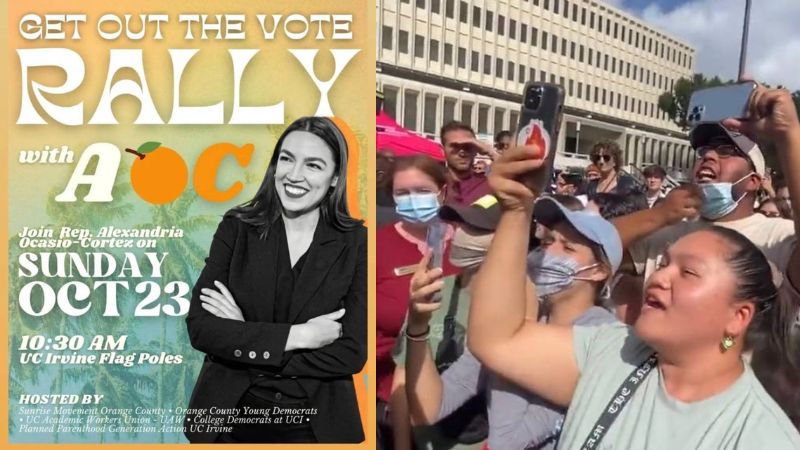 New York Congresswoman Alexandria Ocasio-Cortez was confronted by a group of Latino protestors when she appeared at a “Get Out the Vote” rally in Orange County, California.

Turning Point USA contributor and FRONTLINES host Drew Hernandez captured some of the protest, and wrote, “I went undercover and called out AOC and the Democrat Party for their enablement of the human smuggling taking place at the Open Southern Border. Other Latino students then shame her as she refused to respond today at UC Irvine ‘Security' then blocked our shot.”

The crowd then began to chant loudly in unison, “Fake tears!”

Other criticisms peppered the chants, such as “What about the open border?” and “The blood is on your hands, AOC!”

In 2018, AOC did visited Texas to stage a photo of her crying outside of a parking lot that she implied was her weeping in front of caged children.

Hernandez even yelled “Warmonger!” at one point, echoing a protest last week where the congresswoman was heckled at a town hall meeting in the Bronx, New York by anti-war protestors demanding answers to why she was backing US involvement in the war in Ukraine.

During that event, AOC said that the Biden administration needs to give New York City more taxpayer money for taking care of illegal immigrants, and that the US should accept every single border-crosser as citizens.

When President Joe Biden took office, he dramatically loosened restrictions along the southern border, creating a humanitarian crisis that has led to historic levels of drug and human trafficking. Biden's border crisis has seen a record-high number of illegal migrants pouring into the country, with 1,659,206 crossing over in 2021. There have already been more than two million encounters in the 2022.