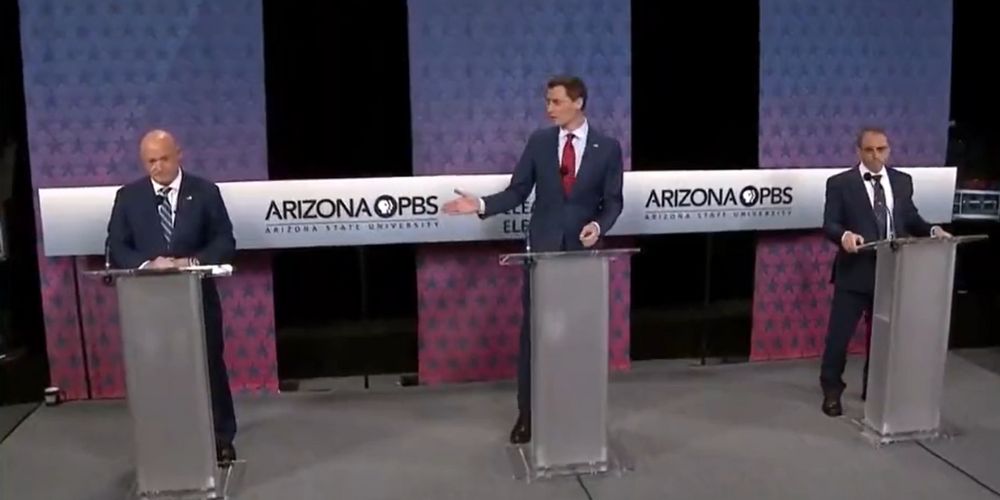 Republican Blake Masters and Sen. Mark Kelly (D-AZ) faced off during their first and likely only debate for one of Arizona’s Senate seats Thursday evening in Phoenix.
The two sparred over the Democrat’s support for legislation that will hire 87,000 more agents for the IRS while voting against an amendment that would have funded 18,000 additional Border Patrol agents.

The two were also joined in the debate by Libertarian candidate Marc Victor.

After opening remarks, Masters, a venture capitalist, who is backed by former President Donald Trump, slammed Kelly over his vote for the Inflation Reduction Act. “Mark Kelly said no to 18,000 more Border Patrol agents, but yes to 87,000 new IRS agents. That shows you what his priorities are. Mark Kelly left our southern border wide open, voted for all the trillions in spending that caused this massive inflation, and he thinks the fix is 87,000 new IRS agents.”

Kelly, the former astronaut who was narrowly elected in 2020 to serve the remainder of the late Republican Sen. John McCain's term responded, “There are votes that happen in D.C. that have nothing to do with Border Patrol agents, and it might have the title on it, and nothing happens, right? So, what I have done is I got $1 billion more for Border Patrol agents, for staffing, you know, for the technical systems to monitor the border, and, where they make sense, to build more border barriers.”

During one of the most contentious moments of the debate Kelly said in response to attacks on his record handling the crisis at the US Southern Border, “I've been focused on the border since day one,” to which Masters responded, “We have a wide-open southern border, so if that's the best you can do, I respectfully request you resign.”

The candidates also clashed over the Inflation Reduction Act which President Joe Biden signed into law in August. The legislation was passed through both chambers of Congress with no GOP support. Economists predict the bill will have no short-term effect on lowering inflation.

The bill included allocating $740 billion toward the IRS, green energy subsidies, and subsidies for the Affordable Care Act among other spending. $80 billion went directly to the IRS which will allow the agency to hire tens of thousands more agents to conduct audits and enforce tax codes.

Masters said, “This crushing inflation is ruining people's lives. I had parents come up to me two weeks ago to a campaign event. They said Blake, we don't eat breakfast anymore. We drink coffee. We drink coffee so that we can afford to feed our kids' breakfast. And that's on you, sir. This is the Joe Biden-Mark Kelly economy.”

Kelly blamed the COVID-19 pandemic for the economic crisis. “Two and a half years ago, we went through something unprecedented. You know, with COVID-19, schools had to shut down. Businesses shut down across Arizona. Sometimes the federal government has to step in to save small businesses. You know, they have to step in to protect livelihoods.”

He continued, “At least Senator Sinema stopped Build Back Better. My gosh, you were ready to vote for that. That would have just ruined our economy.”