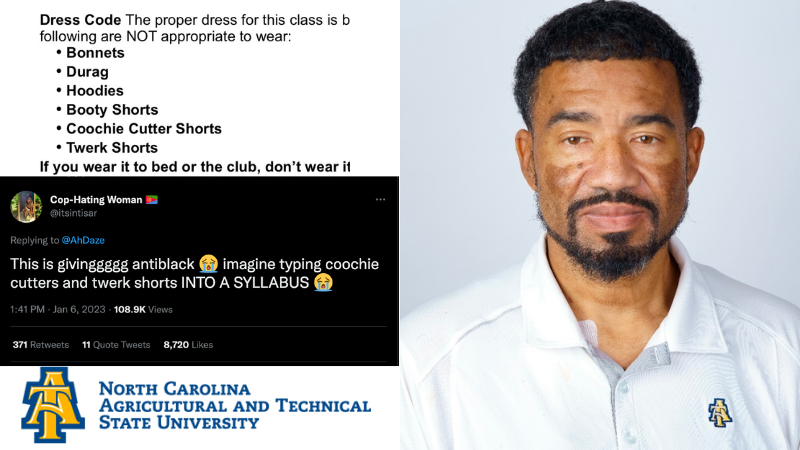 A black professor is facing accusations of “anti-blackness” for telling students to not show up to class in articles of clothing including “hoodies,” “durags,” and “twerk shorts.”

The professor's syllabus banned several types of clothing from his classroom, including “Bonnets, Durag, Hoodies, Booty Shorts, Coochie Cutter Shorts, [and] Twerk Shorts.” It is unclear if there is a meaningful difference between the types of shorts that are prohibited, but all names refer to a style of shorts that are extremely short and tight.

According to LeFlore, who is black, these items are “NOT appropriate to wear to class.”

“If you wear it to bed or the club, don't wear it [to class],” the guidance states.

The comments on the now-viral post were peppered with accusations of LeFlore being “anti-black.”

“very antiblack idk,” wrote one Twitter user, to which the student who originally posted the dress code replied; “No frrr,” meaning “for real.”

“This is givinggggg antiblack,” another user wrote, to which the original poster again concurred.

One commenter posed the question: “How is it giving anti-black?”

“A hoodie is one thing but you have to meet people where they are and speak their language. Making a dress code isn't anti Black it's establishing decorum. We currently live in an environment that people just do what they want and that's not acceptable,” the skeptical Twitter user argued.

“No durags or bonnets is definitely anti-Black. That stuff shouldn't bother anyone or been seen as negative. It's no different than someone wearing a turban or hijab,” someone else replied.

Durags and bonnets are both head coverings, typically worn when sleeping or inside of one's home, to protect Afro-textured hair from tangling and damage, and to preserve hairstyles. The act of wearing them in public is no stranger to discourse within the black community. Many view them as no different than pajamas that should only be worn at home, while many others proudly wear them out for style, or to just cover up a bad hair day.

Still, other people chimed in with non-racial criticisms of the professor's dress policy.

“I'm sorry, but having a dress code in college is just infantilizing. Everyone involved is a grown ass adult who shouldn't be telling other people what to wear,” said a commenter.

“It's probably wrong for a school to sell outside clothes and for a professor to say you can't wear it. Hoodies? That's unenforceable. It's winter in N. America. And a 100 level course? Professor better humble themself. Are head coverings protected? Or just some? They're not hats,” said another.

After the post went viral, the student who shared the syllabus updated the thread to say “he took it off the syllabus.”

According to UniversityHQ, NCAT is America's No. 1 historically black college or university (HBCU).