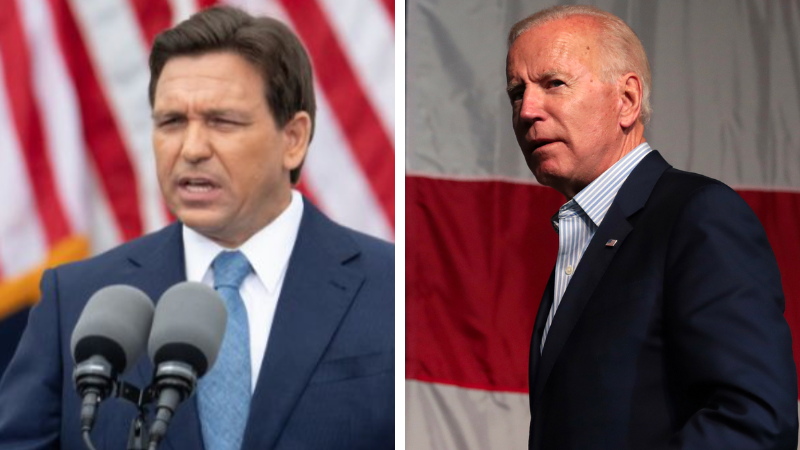 DeSantis made the statement during a Thursday press conference, saying in reference to a question asking for a response to Jean-Pierre, “I think that’s interesting because the Coast Guard actually requested the state’s assistance to handle all these vessels coming.”

“I want to formally request that the TWIN ENGINE FWC and FLARNG aircraft be authorized to patrol out to 12NM from the shoreline of Florida,” the Wednesday email read.

“The justification for this is that, if these aircraft are only allowed out to the 3NM line, by the time the TOI is reported and surface assets are vectored in, the TOI would likely be landed, preventing a maritime interdiction.

“While I understand the state of Florida only has jurisdictional authority out to 3nm to prosecute violations of Florida law, this mission is in the maritime observation and reporting mission, only requiring aircraft to detect and report sitings,” the email continued, adding that “In my opinion, there should be no objections to this as the state will likely not prosecute migrant vessels.”

DeSantis slammed Biden’s open border policies, stating during the press conference that part of “Biden’s disasterous border policies” is the “message that’s gone out to say, ‘the rules don’t matter, just show up and you’re fine. You can’t run a country like that, and it’s caused a lot of problems.”

“And so, we were seeing, you know, the Coast Guard had brought in like 300 people that they had onboarded and put them in the Florida Keys. Well, they didn't have the ability to take care of those folks. There’s vessels left everywhere — on people's property and all this. So, we declared a state of emergency, we provided the Coast Guard the assistance that they've asked for. We are going clear the vessels free of charge for those residents because it wasn't their fault. Maybe we'll send the bill to Biden. We'll see.”

DeSantis continued on to state that “the reality is, this is not the way, you know, you run a country.”

“What we've been able to do has already made a big impact because we're able to deploy air assets to be able to identify if vessels are coming from Cuba, but also Haiti and other places. And then we can then tell the Coast Guard — because the Coast Guard's stretched so thin. And then what the Coast Guard has told us is ‘we are not going get additional resources from the federal government. This is what we have.' So, we're basically filling gaps that the federal government should be filling — and would be filling — if they wanted to do it.”

DeSantis also noted during the press conference that the trial regarding a lawsuit against the Biden administration regarding catch and release policies should be ending “by tomorrow,” adding that the “evidence has been so damning against them.”

“They've basically had to admit under oath that—not only are these policies what they are—but that the White House knew this was what was going to happen.”

During Wednesday’s White House press conference, Jean-Pierre said in regard to DeSantis’ activation of the national guard to deal with the migrant surge, “So we've known for some time now, right? We've seen Governor DeSantis do political stunts, that is how he kind of he perceives to fix this issue from Florida.”

Jean-Pierre added that these migrants are “coming from countries who are dealing with political strife” or seeking asylum, “and he treats them like pawns.”

“And so, we have called that out over and over again and we will continue to do that and he is not dealing with the problem. He’s actually creating a problem.”