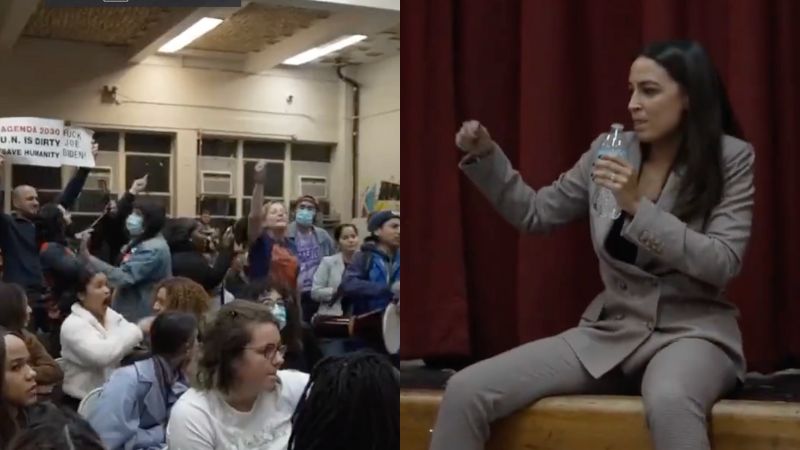 New York Congresswoman Alexandria Ocasio-Cortez compared her constituents to members of the Westboro Baptist Church and therefore does not need to “take them seriously” after a disastrous town hall event on Wednesday.

AOC wrote “These homophobes were yelling Westboro Baptist-style anti-LGBT+ slogans. What do you think I’m gonna do? Take them seriously? If you want to associate w/ their views, that’s your business. But NY-14 will ALWAYS have a champion for LGBTQ+ people on my watch. Period.”

One Twitter user remarked, “You know you’re the representative for everyone in your district right? Not just the ones who vote for you.”

Ocasio-Cortez's remarks accompanied a reposted video of her dancing while a crowd shouted “AOC has got to go.” The congresswoman was hosting a Listening Forum Event in Astoria, Queens, where she was met by the lively group of locals.

Journalist Oliya Scootercaster shared more video and wrote, “Since that video was stolen from my page, here is a link to a full thread with context.”

In one clip, a man can be heard shouting “If you're gay, you get to have a house, but if you're not gay you have to live on the street?”

His comments come after AOC claimed “housing as a human right,” where certain members of the community would be given free housing at taxpayer expense. The progressive also champions LGBTQ centers as part of her equity commitment, which sees district resources disproportionally allotted to their operation.

After the man was dismissed, he added “So if I don't have butt sex, I can't have a place to live?” to which she responded with the false claim that “Sexual orientation has nothing to do with it.”

Lesbian, gay, and bisexual monikers all denote a sexual orientation.

AOC continued to address the crowd, and asked a woman in the audience why she was mad, to which she replied, “I am not mad. There are only two f*cking genders.”

AOC has been a consistent proponent of radical gender ideology, and even started “Trans Wellness Services,” which offers hormone replacement therapy.

She likened the remarks of her constituents to those of the Westboro Baptist Church, whose slogan is “God hates f*gs.” Church members can be seen protesting at the funerals of veterans, as they believe 9/11 was God's punishment for America's acceptance of gay culture.

AOC has had a tough few weeks when it comes to town hall events. Last week, the congresswoman was slammed at an event in the Bronx by anti-war protestors demanding why she was backing US involvement in the war in Ukraine.