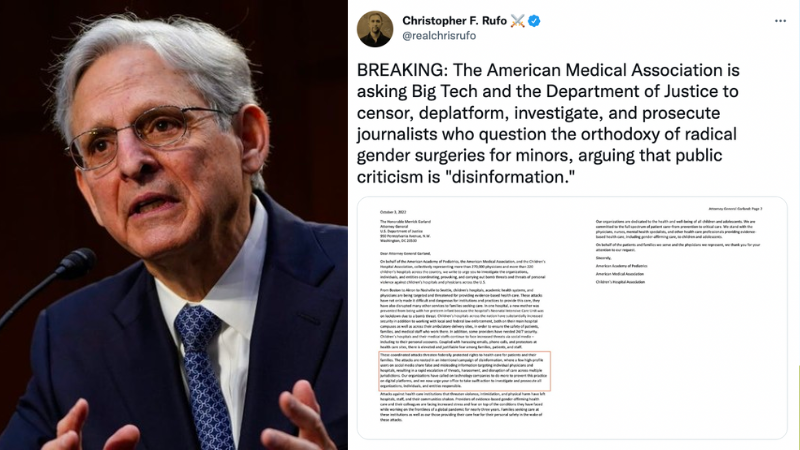 The AMA has stated that the exposure of their practices to the public at large, which has been hidden under soft language like “affirmation” and “top surgery,” has been detrimental to those providers and hospitals that willingly perform these surgeries and administer these drugs.

Many hospitals across the country, from Boston Children's Hospital in Boston to Lurie in Chicago, CHOP in Philadelphia, Golisano Children's Hospital in Rochester, Vanderbilt in Nashville, as well as dozens of others, have launched promotional videos to sell their sex-change services to minors and their parents.

In the letter to Biden's Attorney General Merrick Garland, the AMA states that the exposure of these controversial practices has caused difficulty for the providers that offer them. They say that the journalists who have been making these videos and practices public have been “coordinated attacks” that “threaten federally protected rights to health care for for patients and their families.”

The AMA calls the information that has been published by this outlet, and so many others, “an intentional campaign of disinformation, wehre a few high-profile users on social media share false and misleading information targeting individual physicians and hospitals.” They claim that this information has resulted in “a rapid escalation of threats, harassment and disruption of care across multiple jurisdictions.”

As such, they call “on technology companies to do more to prevent this practice on digital platforms.” But they go further, urging the Department of Justice “to take swift action to investigate and prosecute all organizations, individuals, and entities responsible.”

Other groups that signed on to the letter include the American Academy of Pediatrics and the Children's Hospital Association.

Journalists have been diligently exposing the medicalized gender transition of minors made available at children’s hospitals across the nation, while institutions have balked at their practices being made public. Boston Children's Hospital was subject to a fake bomb threat, while Lurie hospital claimed that one man holding a billboard stating that children cannot consent to sterility was a threat.

It was only a year ago that Biden's Department of Justice was asked to censor and suppress free speech. Garland announced that, at the behest of the NSBA, he would be investigating parents who had attended school board meetings to express their concerns regarding forced masking, as well as critical race and gender ideology in schools. It was later revealed that the DOJ asked the NSBA to pen the letter so that the DOJ would have amunition to attempt to silence parents who were speaking out for their parental rights.